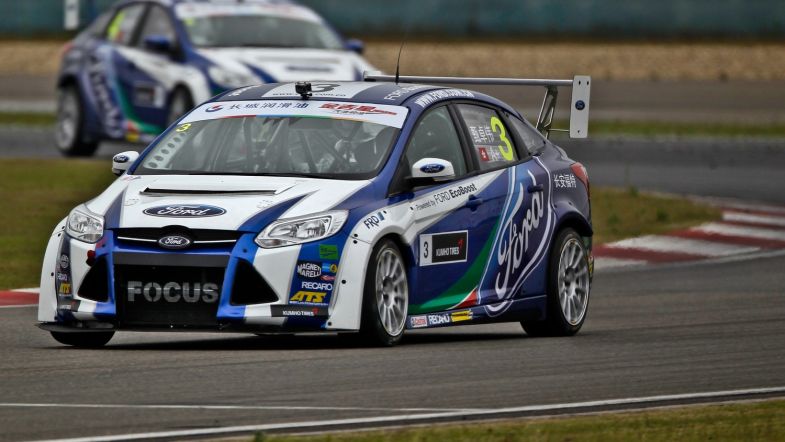 Pole to victory for Andy Yan in Shanghai

Andy Yan won the second round of the 2013 CTCC at the Shanghai International Circuit this weekend, after gaining pole position in qualifying on Saturday.

Many teams changed onto slick tyres before the warm-up lap due to the uncertain weather conditions, which saw Lin Le Feng and Huang Chu Han of Kia Racing start from the pit lane.

Martin Xie of Chang’an Ford FRD Team suffered from an engine misfire before the start and returned to the pits.

Ford’s Andy Yan pulled away at the start with Wang Rue and Zhang Sheng Jun followin in second and third places. Guo Hua Sheng of Kia Racing returned to the pits after the first lap due to a mechanical problem, whilst reigning champion Han Han retired his Shanghai VW 333 Racing Polo on lap three with damage from contact at the start. Wang Rue passed Zhang Sheng Jun on lap six and climbed to second position.

Martin Xie and Guo Hua Sheng returned to the track on lap 12 after their cars had been repaired, while the battle for third place became intense. Guo Hua Hang fell to seventh on lap 14 after he was passed by Zhang Zeng Dong and Rainey He. Zhang Sheng Jun was also passed by Jiang Tengyi and fell to fourth on the 18th lap, while Rainey He’s charge then ended as the Ford driver returned to the pits and retired.

Rainey’s team-mate Jiang slowed on lap 21, and eventually ended up in ninth place after a collision with Guo Hua Hang on the following lap.

Andy Yan was unchallenged at the front won the first race for Chang’an Ford FRD Team in 2013. Wang Rue finished second for Volkswagen whilst Zhang Sheng Jun finished third in the privateer Chevrolet Cruze after a challenge from Zhang Zeng Dong’s Volkswagen on the final lap. Zhang therefore becomes the first Taiwanese driver to finish on the podium since the current CTCC was born in 2009.

The third round of the 2013 CTCC will be held on June 9th at Shanghai’s Tianma Circuit.