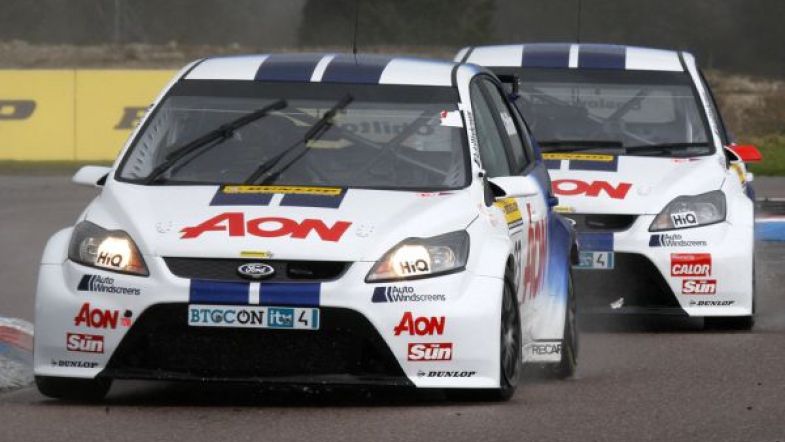 Team Aon are planning to drop the controversial LPG engine in 2011, and plan to run three Ford Focuses with a newly built NGTC engine next year.

Team Aon, run by Arena Motorsport, are currently position to better their best result in the BTCC, with their previously best performance being third place in the drivers’ championship, and second in the teams and manufacturers championships in 2003 when running as the Honda Racing works team.

The team re-entered the BTCC in 2009 after a three year absence with the Ford Focus, but after a troubled first season, the team’s results have been much better this season after a switch to LPG fuel, supplemented by a turbo-charger granted by TOCA to make up for the power difference of running the alternative fuel.

Mike Earle explains various factors have seen the team make the decision to move to the new NGTC engine specification, but unlike the engines run by Pirtek Racing, Pinkney Motorsport and Special Tuning UK, Arena’s engine development partner will be building their own unit.

“Mountune are doing us a petrol version of the NGTC engine, so hopefully then with what will be a standard NGTC engine, we won’t get all the hassle we’ve got” said Earle to TouringCarTimes.

“It’s because they don’t understand, I don’t think they consider enough that the chassis is not bad as well.”

When asked if switching the engine from the turbo-charged LPG unit to the NGTC engine is a good opportunity to prove the strength of the car on merit, Mike responded:
“It will be, but it’s not the reason we’re doing it. I think that under the circumstances, TOCA will make the alternative fuel rules much much tighter, and it probably won’t be an advantage anymore.”

Team Aon had earlier planned to introduce a third car after the mid-season break, but have decided to focus on their two cars for the remainder of this season. Mike also ruled out running the third car at Brands Hatch, but hopes to see it running next season.

“We’d like to bring three cars next year, but it’s a case of budget obviously as always – we have a third car, it’s down in the workshop, we’d like to get someone in it.”