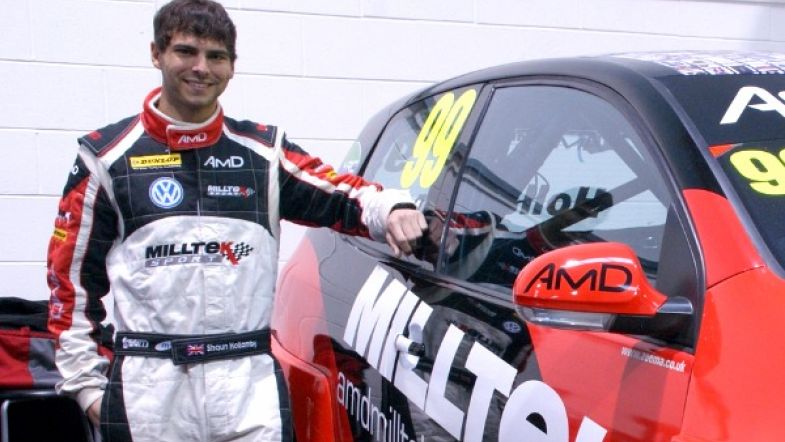 Tom Onslow-Cole has been confirmed as the new driver for the AmD Milltek Racing Volkswagen Golf this season, replacing Team Principal Shaun Hollamby who will be stepping down from driving duties.

The 23-year-old from New Malden will drive the team’s upgraded Next Generation Touring Car (NGTC) powered Golf for his fifth season in the British Touring Car Championship, after spells with Triple Eight Race Engineering, West Surrey Racing and Arena Motorsport.

Onslow-Cole hopes to be challenging at the front with the small independent team, though admits with limited testing so far it will be a struggle early in the season.

“I haven’t had a chance to test the car, and to be honest I’m not fussed too much about that as a driver, it’s a front-wheel drive touring car which I should hopefully be able to just step into,” said Onslow-Cole to TouringCarTimes.

“But for the team, the turbo is going to make a bit of a difference, it’ll change the weight of the car, and there will be little bits for us all to learn…but we’ll get on top of it quickly.”

AmD Milltek Racing is going into their second season in 2011, with Team Principal (and former driver) Shaun Hollamby regularly pointing out that 2010 was always a development year for team. The Golf’s best finish was 14th last season, but the team’s new driver expects the car can deliver a lot more.

“I think people have already written the car off because of the results it had last year, but from the inside-looking-out with the car, when I passed it a few times in testing the chassis and the braking actually looked very very strong, it was just the engine that was letting it down.”

“Now they’ve changed the powerplant and gone to Lehmann for this new engine I really do think it could be quite strong.”

After a year with Arena Motorsport, where Onslow-Cole took four race wins and went into the season finale with an outside chance of the title against Jason Plato, Gordon Shedden and Matt Neal, Tom’s looking forward to a different environment with the smaller AmD Milltek Racing outfit.

“I think we can do it a good job with it and I really like the team as well. Straight away when I went there I was completely sold on it. They’re a real good bunch of guys”.

“I don’t like not winning, I really hate it. I like to win and I’ve managed to win every year we’ve been in the touring cars in different cars and I really am going to do my utmost to make that happen again with the Golf.”

Team Principal Shaun Hollamby was delighted with his new signing, and admitted to TouringCarTimes he was worried for a moment when Tom was spotted tested the Special Tuning Racing Leon a few weeks ago thinking he’d lost the chance to sign the youngster.

“At a level of racing like the BTCC, there’s no point going in just for fun,” Hollamby told TouringCarTimes.

“We’re a serious team, and the guys here with Stuart Beaton and Chris Tweed have done a fantastic job with the car, and we’re really looking forward to a great season in 2011 with Tom on-board.”

Hollamby added:
“Stepping down from the driving duties this season was an easy decision once I had got Tom to sign on the dotted line. Tom is one of the Top 10 Touring Car drivers in the world and has won races in every car he has driven- our job is to continue this winning streak!”

“I would not have approached a driver of Tom’s standing if I did not genuinely believe our Golf was going to be capable of some serious giant-killing acts in 2011.”

The team unveiled their revised livery at the Autosport International Show in January, and will present the car and their new driver at the BTCC Media Day this Thursday with the first full open test of the season.