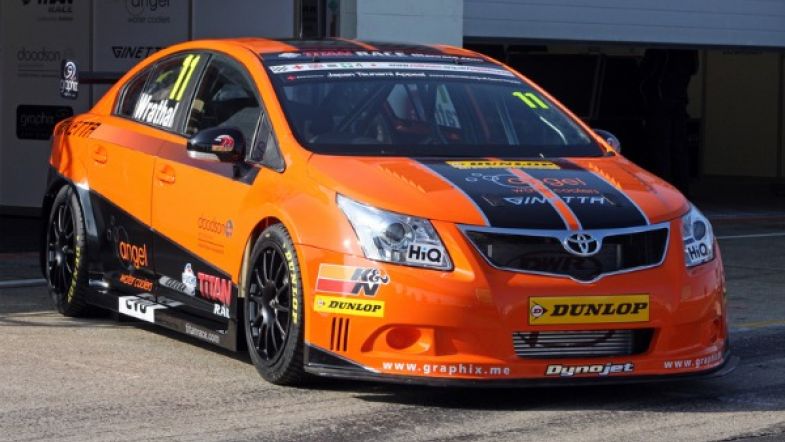 Wrathall’s objective is to finish at Brands Hatch

Frank Wrathall is pragmatic about his upcoming BTCC debut and that of his car which was ready just in time for the media day, with the Dynojet Racing Toyota Avensis yet to set a lap.

The 2010 Ginetta G50 Cup champion has been busy preparing for the switch to the front-wheel drive Toyota.

“I did four days in the Clio at Rockingham, Silverstone, Brands and Thruxton,” said Wrathall to TouringCarTimes.

“Out of those four days we have three very good productive days, we were just halted a bit by the weather at Thruxton. Had a bit of a tuition off of Rob Huff as well which worked out great, obviously there’s no one better to give out advice. The Clio’s an ideal car, similar power to weight ratio and similar handling characteristics, so we should be in good stead.”

The development of the new Next Generation Touring Car (NGTC) Toyota Avensis cars has been behind schedule, with Speedworks Motorsport just picking up their car last week and the Dynojet Racing team’s car being delivered at media day.

Although development has continued with the TOCA prototype, this does mean Wrathall’s left with a short window to do any testing with his car which will run with a Toyota-based 2.0 litre turbocharged engine built by X CTech R.

“Obvious it’s a brand new project so we’ve been pushed for time on it, so we haven’t had the best preparation as far as running the car, so just to go to brands and finish all three races will be a great achievement.”

“We’ve got no pressure to go out there and win or be at the front, just to bring the car home will be a nice feeling…get some miles under our belt and then we can start to concentrate on bringing the times down.”

The team will be testing for a few days next week when the car has its gearbox fitted, before heading down to Brands Hatch for the first round of the 2011 BTCC season.