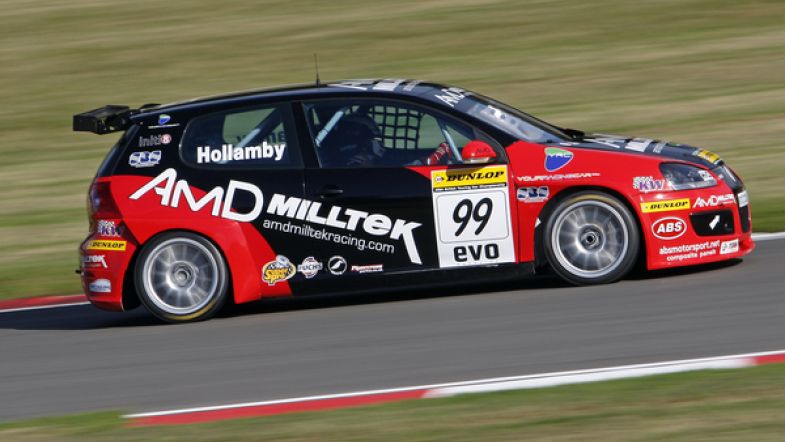 AmD Milltek Racing Team Principal Shaun Hollamby has confirmed he will return to the driving seat at the team at the next round at Croft after the sudden departure of Tom Onslow-Cole to Arena Motorsport at the weekend.

Onslow-Cole, who had joined the team after being dropped by Arena Motorsport last year, announced to his team that he had signed with someone else shortly before the third and final race of the weekend.

It was then announced on Monday that Onslow-Cole would be returning to Arena to compete in a third Ford Focus alongside former team-mate Tom Chilton and Onslow-Cole’s effective replacement, Andy Neate.

Just three days later, AmD Milltek Racing Team Principal Shaun Hollamby has confirmed that he will be taking over from Onslow-Cole in the team’s Volkswagen Golf for the next round of the championship, before evaluating what to do next over the mid-season break.

“We must have had at least 45 serious individual enquiries – I have been quite astonished,” said Hollamby to btcc.net.

“However, we want to get this right so instead of jumping out of the frying pan and into the fire we’ve decided on a known quantity for Croft – me!”

“We will see how I get on at Croft and then decide on the next course of action during the lengthy mid-season break. With Croft being so close we decided holdfire with who will be driving the AmD Milltek VW Golf until we can properly evaluate all the driver options of which I am only one. I will test at Brands Hatch on Thursday this week and unless I have personally lost a second a lap since last year I will race the car at Croft.”

“My ideal driver would be a young up and coming driver who had a massive budget but he or she didn’t call! A number of names from the recent BTCC past are being considered but also some younger guys who maybe deserve the break.”

“I would like to say a big ‘thank you’ to all our sponsors but especially Phil Millington from Milltek and Christian Osborne from Tesco Momentum 99, without whose support the last few days would have been much harder!”