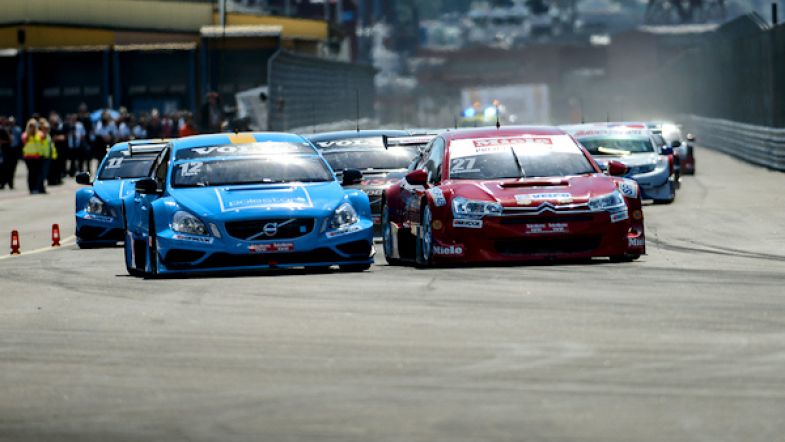 The Swedish touring car scene unifies after a one-year split

The Scandinavian Touring Car Championship and TTA Racing Elite League will unite next year after operating as two separate championships in the 2012 season. The championship will continue under the name STCC, but adopt the technical regulations of the breakaway TTA series.

In the 2012 season, the four STCC teams known under the name TTA (Touring Car Team Association) went off to form their own championship called TTA – Elitserien I Racing with a separate calendar, whilst STCC continued on with teams from Volkswagen, Chevrolet and Honda support. After a year apart, the two series have decided to merge for the 2013 season.

The split arose as the teams of the TTA; Volvo Polestar Racing, Flash Engineering, Brovallen Design and WestCoast Racing, favoured a lower cost, low complexity solution to Super 2000 which they believed was best fulfilled by switching to a Solution F-built silhouette formula. STCC also wanted to reduce costs, but favoured the more expensive (but cheaper than S2000) Next Generation Touring Car platform which had introduced by and for the British Touring Car Championship in 2011.

The four teams of the TTA all ran four cars each in the 2012 season, giving a grid of 16 cars for each race as well as taking a number of major events including the Gothenburg street race from the STCC.

The STCC however kept Volkswagen and Chevrolet on board, albeit both competed with S2000 cars with different specification engines, while teams from Honda and SEAT fielded NGTC-powered cars only. The STCC also introduced successful new events at Solvalla and Östersund, and a close championship which saw rising star Johan Kristoffersson defeat reigning champion Rickard Rydell at the finale, whilst Fredrik Ekblom won the TTA series with relative ease for Volvo.

After a season which has damaged what was perhaps one of the most competitive national touring car championships in the world just one year prior in 2011, the two series have decided to put their differences aside and merge for the 2013 motorsport season.

The championship’s official title will be STCC – Elitserien I Racing, and the regulations used will be that which the TTA introduced this year, silhouette chassis built by Solution F with 3.5 litre V6 engines, which will eventually be phased across to the World engine formula of 1.6 turbocharged units as used in the FIA WTCC and World Rally Championship.

“We have had a productive dialogue with TTA which has resulted in this solution,” said Rickard Pålsson, STCC owner. “We have found a common ground to stand on and we are going to continue to develop the concept to create the best possible conditions for Swedish racing.”

“Swedish racing needs stability and sustainability,” said TTA Managing Director Greger Petersson. “Everyone who is involved are very happy with the solution. We have got the conditions to create an even stronger platform for Swedish racing and the future looks a lot brighter thanks to that.”

STCC Managing Director Bob Huzell added:
“STCC is an important platform for the car industry in regards to marketing. To strengthen the relationship, we have decided to launch a three-year-planon how to develop the concept. The cars are going to be changed on a number of points. Turbo charged 1.6 litre engines from the different manufacturers will be introduced over time, among other things.”

STCC tyre supplier and partner Yokohama has also stepped aside from its commitment, which played a part in the success of the negotiations. TTA tyre supplier Hankook, which also took over as the DTM tyre supplier from 2011 will be the new tyre partner for the STCC in 2013.

The STCC plans to announce its 2013 calendar and support class structure in the coming weeks.