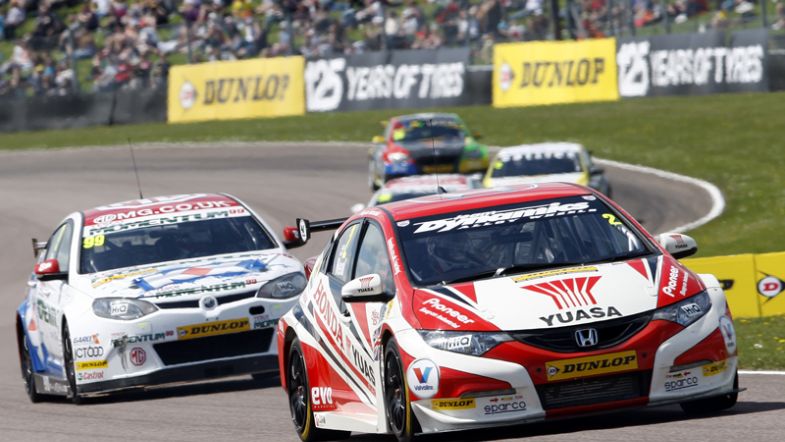 Eurotech Racing’s Jordan had led from the first lap, after Neal’s team-mate Gordon Shedden ended up in the barriers after an incident with Triple Eight MG’s Jason Plato at the complex.

Plato’s team-mate Sam Tordoff was fourth ahead of Jordan’s team-mate Jeff Smith, who recovered after a poor start. Colin Turkington was sixth for West Surrey Racing ahead of an entertaining battle pack of Mat Jackson, Dave Newsham, Aron Smith and Adam Morgan.

Jordan managed to limp over the line in 11th, while Jack Sears Trophy honours went to Liam Griffin in the Motorbase Performance Ford Focus.

He finished 20th overall, in an entertaining race which Lea Wood, Joe Girling and James Kaye all led at some point.

The start provided the first major talking point as both Shedden and Plato passed Jordan, and then Plato appeared to make contact with Shedden on the exit of the complex.

Shedden hit the barriers and finished 25th and a lap down, after a trip to the pits.

Onslow-Cole was the main mover in the leading cars, passing Jeff Smith at the start and Tordoff for fourth at the final chicane on lap six.

While the battle at the front settled down, much of the entertainment came from a race-long dice between the Motorbase Performance pair of Jackson and Smith, and Toyota pair of Newsham and Morgan.

Jackson eventually came out on top, showing much better pace than in qualifying in his Ford Focus.