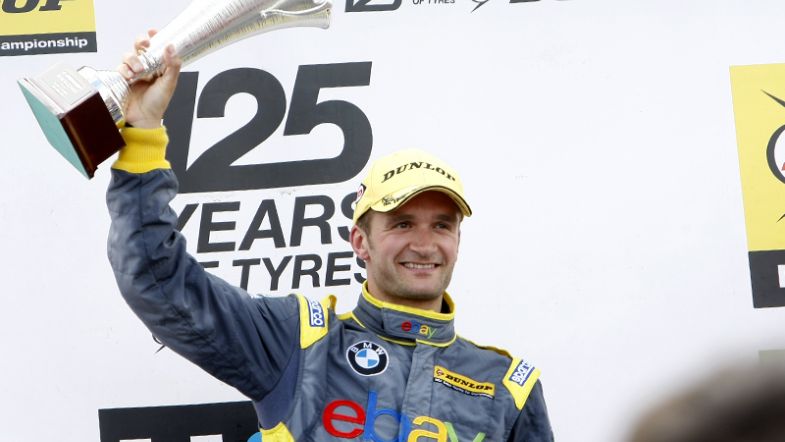 West Surrey Racing’s Colin Turkington doubled up at Croft, taking a thrilling win in an unpredictable wet-dry race after holding off a fierce challenge from Honda Racing Team’s Gordon Shedden.

Rain fell heavily in the minutes before the race, and the the Triple Eight MG pair of Jason Plato and Sam Tordoff made a late call to go with wet weather tyres, flying off into the distance at the start.

But as the weather improved, they were quickly reeled in by the slick-shod runners, and plummeted to the rear of the field.

Turkington’s BMW 125i came under pressure from Shedden’s Honda Civic once established in the lead, with the pair side-by-side across the line on lap nine.

But the Northern Irishman managed to eke out a small gap in the last few laps, taking the flag 2.987 seconds in front.

Behind the leading pair, the excellent Tom Onslow-Cole took another podium for Tony Gilham Racing in his Volkswagen CC, ahead of championship leader Matt Neal in the second Honda Racing Team Civic.

David Nye took his first win in the Jack Sears Trophy, after a fantastic race-long dice with Jake Hill and Lea Wood. The Welch Motorsport man hung on to finish 15th overall in his Ford Focus, while Wood outdragged Hill to the line on the last lap to take second in class.

Plato and Tordoff eventually finished 20th and 21st, both a lap down. Motorbase Performance’s Michael Caine was another driver to make a failed gamble on wet weather tyres in his Ford Focus, and he retired with a car problem late on.

It was another disappointing race for Caine’s team-mate Mat Jackson, who suffered a broken rear suspension in an incident with Jack Goff on lap five. He and Tony Gilham Racing’s James Cole were the only retirements, the latter pulling into the pits in his Vauxhall Insignia at the end of the green flag lap.

The reverse grid final race will get under way at 17:12 BST.