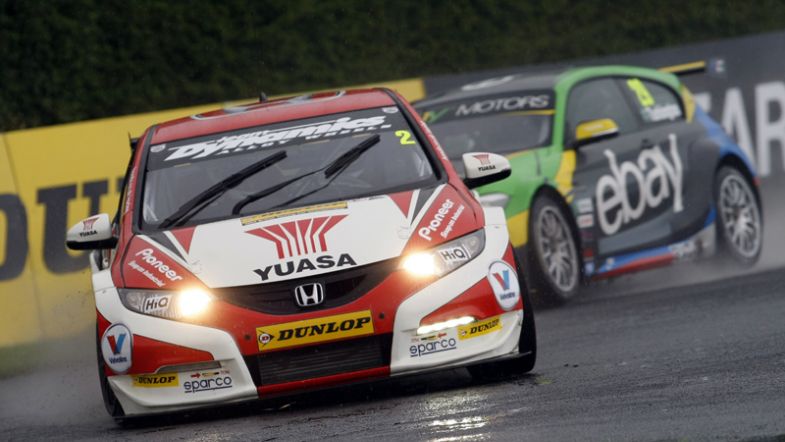 Championship leader Matt Neal took victory in dreadful conditions in the final race of the day at Croft, surviving a late scare to finish just ahead of Colin Turkington.

The Honda Racing Team driver took the lead from Nick Foster on lap three, and was comfortable at the front until the final lap, when he ran wide at both Tower and the Esses.

It meant West Surrey Racing’s Turkington closed up to within 0.631 of a hat-trick of wins, but had to settle for second place.

Eurotech Racing’s Andrew Jordan was third after a late off in his Honda Civic, ahead of Neal’s team-mate Gordon Shedden, and the impressive Dave Newsham, in his Speedworks Motorsport Toyota Avensis.

Triple Eight MG pair Jason Plato and Sam Tordoff charged through from the back to finish sixth and seventh, with Foster, Aron Smith and Jeff Smith completing the top 10.

Lea Wood kept his head in an attritional battle in the Jack Sears Trophy to win in his JWT Performance Vauxhall Vectra, in 16th overall.

It was a largely clean race despite the conditions, but still featured its fair share of incidents.

Adam Morgan lost his 100 per cent points-scoring record with a big off at Clervaux on lap five, his Ciceley Racing Toyota Avensis going straight on into the barriers, in a carbon copy of his practice shunt.

Mat Jackson and Dan Welch were both eliminated at the hairpin on lap two, when the Motorbase Performance man attempted a move at the final chicane, and t-boned Welch’s Proton Persona.

As the chaos reigned around them, the MG pair swiftly made their way forward. Plato was 12th by lap four, 10th by lap six and ninth by lap eight, moving up to seventh past Aron Smith on lap 13 and sixth past Foster on the penultimate tour.

For his part, Tordoff followed in the tracks of his team leader, setting four fastest laps and finishing just under 0.3 behind at the flag.

Further forward, team-mates Turkington and Foster touched at the super-fast Esses as the former made his way past, while Jordan put a impressive move on Foster around the outside of Tower, through the standing water.

With half the season now complete, there is now a six-week summer break, with action resuming at Snetterton in early August.