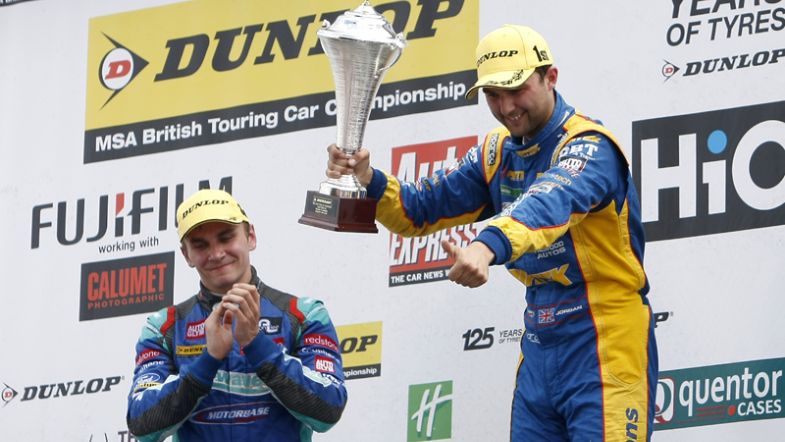 Eurotech Racing’s Andrew Jordan won a breathless second race at Snetterton, ahead of hard-charging title rival Matt Neal and Aron Smith, after Jason Plato had retired from the lead with an engine problem.

The win was not without a hint of controversy, as West Surrey Racing’s Colin Turkington was driving a masterful defensive race in front in his BMW 125i, before Jordan made contact at Williams on lap 11 as he made his way past.

Turkington dropped to sixth at the flag, allowing Smith to take his first podium of the season in the much improved Motorbase Performance Ford Focus, backed up by team-mate Mat Jackson in fourth.

It would have been second for Smith had it not been for a superb move from Honda Racing Team’s Neal on the final lap, which started at Montreal and ended at Oggies, capping a fantastic drive from the series leader.

The race was a disaster for the previously dominant Triple Eight MG squad, with Plato slowing on lap five after a two-lap safety car period, and race one winner Sam Tordoff crawling home 18th after a series of off-track excursions.

Frank Wrathall finished 10th after starting from the back of the grid, while the reverse grid draw gave Newsham pole for the last race.

Lea Wood took his second win of the day in the Jack Sears Trophy, finishing a superb 13th overall in his JWT Performance Vauxhall Vectra.

After a clean start, the drama started on lap two, when AmD Tuning’s James Kaye dived down the inside of Welch Motorsport’s David Nye at Riches. They had been running three-wide with Motorbase Performance’s Liam Griffin, and when Nye took evasive action when Kaye passed, he made contact with Griffin, who ended his race in the gravel.

After two laps behind the safety car, Jordan and Shedden swapped places several times at Montreal, Oggies and Agostini, before the former finally made his way past. Dan Welch’s Proton Persona was also eliminated after contact from Newsham.

Turkington took over the lead when Plato slowed and proceeded to defend brilliantly from first Tordoff, and then Jordan when he passed Tordoff at Agostini on lap seven.

There was more chaos on lap eight when Jordan’s team-mate Jeff Smith hit Rob Austin under braking for Montreal, and was collected by Newsham when he tried to rejoin. The Honda Civic was out of the race on the spot.

Neal was making swift progress, passing Jackson at the Brundle/Nelson complex on lap nine, as a line of eight cars filed through at the head of the field.

Jordan took the lead with his robust pass on Turkington on lap 11, which turned out to be a bad lap for West Surrey Racing. Rob Collard tried to pass Shedden at Brundle and lost control, hitting the Honda and breaking his rear suspension.

The final laps gave the crowd a chance to catch their breath, save two spins from Tordoff which dropped him out of contention, before Neal’s decisive move on Smith on the final tour.

The reverse grid final race gets under way at 17:02 BST.