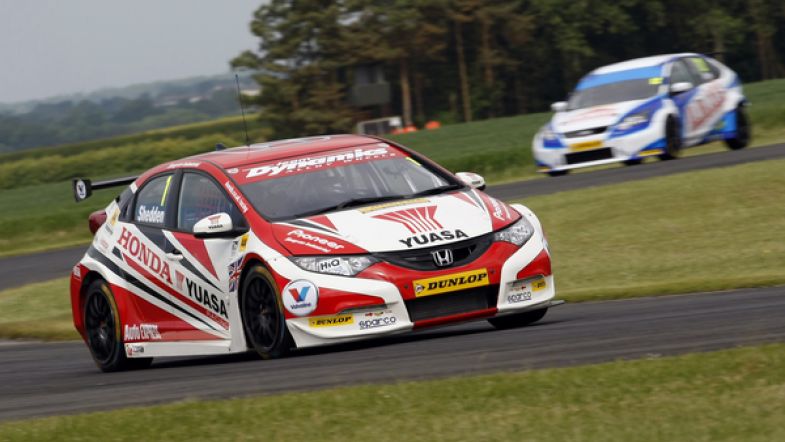 Reigning champion Gordon Shedden took victory in a dramatic final race at Snetterton after a clash with Colin Turkington, with the Motorbase Performance pair of Mat Jackson and Aron Smith taking advantage to complete the podium.

It was another chaotic encounter, which saw a dramatic roll for Triple Eight MG’s Jason Plato, and Turkington again denied a victory shot due to contact with another driver.

Shedden passed the 2009 champion in a forceful move at Agostini on lap eight, allowing the vastly improved Ford Focuses of Jackson and Smith behind to make it a hat-trick of podium finishes for the Kent team.

Adam Morgan was fourth after pushing Smith hard throughout, ahead of a charging Sam Tordoff, who finished fifth after starting 18th on the grid.

Turkington, Andrew Jordan, Matt Neal, Rob Collard and Nick Foster completed the top 10, while Lea Wood made it a hat-trick of wins in the Jack Sears Trophy, finishing 15th overall in his JWT Performance Vauxhall Vectra.

The chaos started on the opening lap, when pole man Dave Newsham had a poor start in his Speedworks Motorsport Toyota Avensis.

Newsham was battling with Honda Racing Team’s Neal when the two made contact at Williams, putting the Toyota out and relegating the Honda to the tail of the field. Neal would battle back well to finish in the top 10.

Just behind them, Plato’s car snapped sideways, causing him to hit the armco and roll. Fortunately, the car landed on its wheels and Plato was able to get out unhurt.

After three laps behind the safety car, there was more action at Riches when Ollie Jackson, Bratt and Dan Welch got involved in an incident, which put Bratt out and left the Welch Motorsport man with a puncture.

The battle for the final podium spot intensified in the closing laps, but Smith was able to pull out a small gap as Morgan defended from the charging Tordoff.

Jordan was passed by both Tordoff and Turkington on the 13th and 14th laps, with the maximum ballast from race two clearly hurting his pace.

Elsewhere in the points, Bratt’s team-mate Rob Austin had looked set to finish fifth in his Audi A4 before spinning off on lap nine, recovering to 12th.

The series now heads north to Scotland, and the Knockhill circuit, in three weeks’ time.