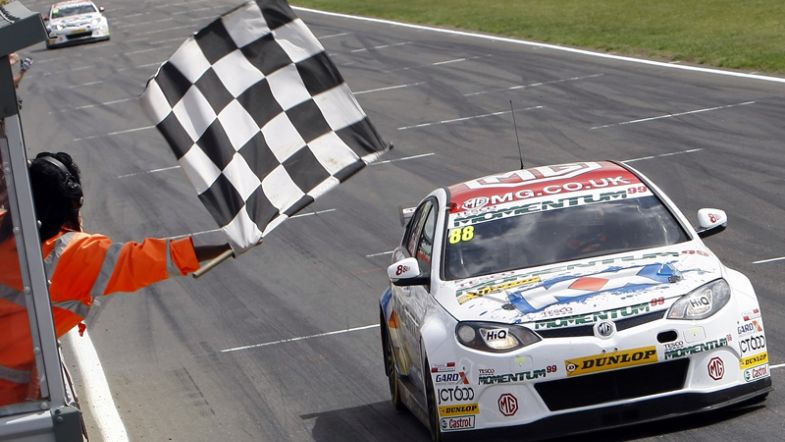 Sam Tordoff took his first BTCC win with a commanding lights-to-flag drive in the opening race at Snetterton, ahead of Triple Eight MG team-mate Jason Plato.

In a largely uneventful 12-lap encounter, Tordoff made a perfect start from pole position and steadily edged away from Plato, who had to fend off the attentions of Honda Racing Team’s Gordon Shedden.

Colin Turkington’s West Surrey Racing BMW 125i and Andrew Jordan’s Eurotech Racing Honda Civic were also close behind in the queue behind Plato, with Aron Smith maintaining his qualifying position in sixth for Motorbase Performance.

Turkington and Smith passed Jordan at the start, but Jordan quickly re-passed Smith at Agostini, and the positions remained unchanged throughout.

Ciceley Racing’s Adam Morgan had a typically solid outing in seventh, ahead of Mat Jackson, Matt Neal and Rob Collard.

Championship leader Neal made steady progress forward from 11th, passing Rob Austin and Jack Goff, but was unable to fight off the attentions of Jackson, who passed at the end of the Bentley straight on lap 10.

Neal’s boost woes appeared to be well-founded, as in his battle with Goff, the Vauxhall Insignia drew away by several car lengths on the straights.

In the Jack Sears Trophy, Lea Wood took his seventh win of the year in 19th overall, in his JWT Performance Vauxhall Vectra.

Although the battle at the front was uneventful, there were a number of drivers troubled by incidents and mechanical woes lower down the field.

Will Bratt was forced to pit in his Rob Austin Racing Audi A4 after his bonnet flew up at the end of the opening lap. He finished three laps down in 24th, after temporary repairs with large quantities of duct tape.

Dan Welch’s positive qualifying in the Welch Motorsport Proton Persona came to nothing when he was fired off into the infield by Collard on lap one, while Dave Newsham had a huge spin in his Speedworks Motorsport Toyota Avensis on the last lap.

Newsham was trying to pass Goff at the end of the Bentley straight, after recovering to 12th following a poor start.

Frank Wrathall, James Kaye, Liam Griffin and Warren Scott all stopped with apparent technical problems, while Robb Holland had a brief off on the way to 21st, ahead of the new IP Tech Chevrolet Cruze of Andy Neate.