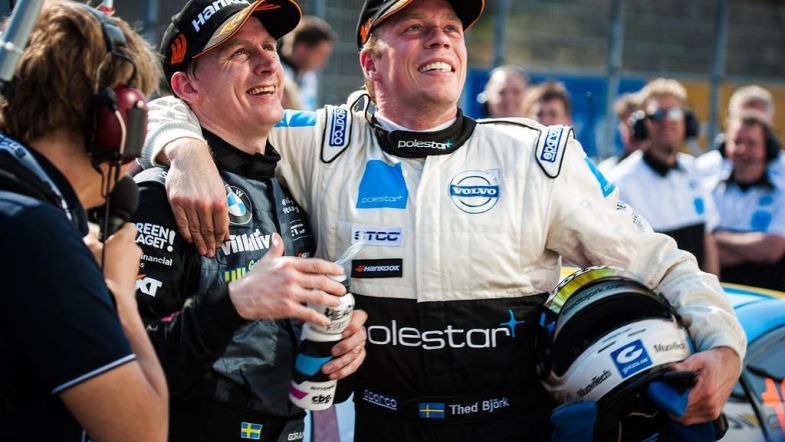 Richard Göransson headed a BMW 1-2 at Tierp Arena as Thed Björk and Volvo Polestar Racing secured the titles thanks to third position in the race today.
“I rank this title as my best, I am lost for words, this is awesome!” said Björk.

Björk headed the field from pole position but was in the last part of the race unable to defend from first Göransson and a couple of laps later his team mate Fredrik Larsson. The BMW duo was close over the finishing line, but with Göransson securing his second victory of the season.
“We have made some changes that have enabled us to catch up with Volvo. It was amazing to win the race today, but a big congrats to Thed, he is a worthy champion,” said Göransson.

Daniel Haglöf fought his way to fourth position in the race, getting past Linus Ohlsson at mid-point of the race. The overtaking maneuver caused drama behind as Ohlsson got caught up in a fight with Citroën driver Jocke Mangs and Volvo colleague Fredrik Ekblom. The fight resulted in Mangs dropping behind Ekblom, while Ohlsson kept fifth over the finishing line.

Robert Dahlgren stated from second on the grid, but lost two positions to the BMW drivers in to the first corner. The bad luck continued a bit later as the Volvo Polestar Performance driver was penalised with a drive through penalty for jumping the start, dropping him from fourth to tenth position. Dahlgren later fought his way up through the field, only to retire six laps from the finish due to technical problems.

Alx Danielsson was caught in a fight with Prince Carl Philip Bernadotte. The two swapped positions for a couple of laps, before the two made contact, resulting in a retirement for Danielsson and a drive through penalty for Bernadotte who still managed to finish 10th.

With one race weekend and two heats left of the season, Björk has secured the title ahead of Göransson and Volvo the manufacturers’ title ahead of BMW.

The season finale is held at Mantorp Park in two weeks.