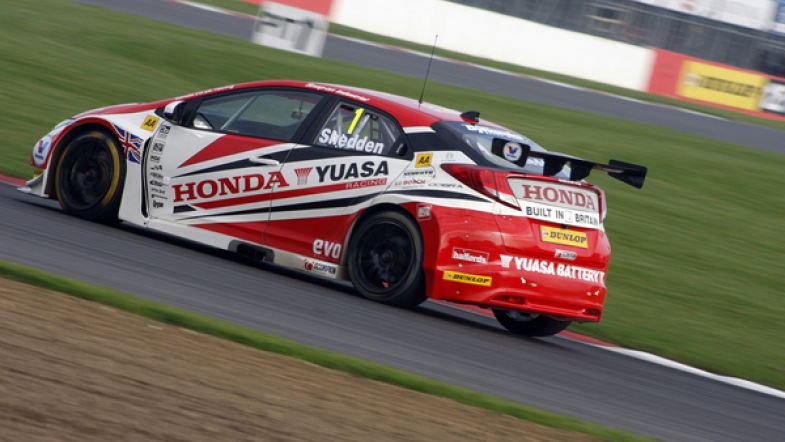 Honda Racing Team’s Gordon Shedden won the final race at Silverstone from seventh on the grid, keeping his hopes of retaining his BTCC title alive.

Shedden took the lead from West Surrey Racing’s Colin Turkington into Becketts on lap 14, after a safety car period to retrieve debris on the circuit.

And he drew away to win from Motorbase Performance’s Aron Smith, who also passed Turkington in the same move to take his second podium of the day in his Ford Focus.

The result means there are still five drivers going into the final weekend at Brands Hatch with a chance of taking the championship, but the odds are looking increasingly long for Turkington and Triple Eight MG’s Jason Plato, who are 48 and 49 points behind respectively.

The 2009 champion was forced out on lap 22 when his BMW 125i suffered broken steering after contact with Mat Jackson along the pit straight, causing him to spin wildly at Copse.  Plato, meanwhile, finished seventh after being forced down the order by Speedworks Motorsport’s Dave Newsham on the last lap.

Shedden’s team-mate Matt Neal finished third in his Honda Civic, and goes into Brands 34 points behind series leader Andrew Jordan, with the Scot just a point further behind in third.

Of the other drivers in the top 10, Adam Morgan was eighth from 18th on the grid after a race-long charge in his Ciceley Racing Toyota Avensis, ahead of Jack Goff and Dan Welch, who caught the eye by passing both Nick Foster and Rob Collard in one move at the end of the Wellington Straight.

Lea Wood was the only starter in the Jack Sears Trophy in his JWT Performance Vauxhall Vectra, winning by default in 20th overall.

Neal again drove well to finish on the podium with his broken finger, but he was embroiled in the race’s major talking point.

Triple Eight MG’s Sam Tordoff attempted a pass on the Midlander into Luffield on lap two, and was in front of the Honda coming into Woodcote. The two tangled and Tordoff spun off to the outside of the track, eventually finishing 14th.

The showdown weekend at Brands Hatch gets under way with practice and qualifying on Saturday, October 12.