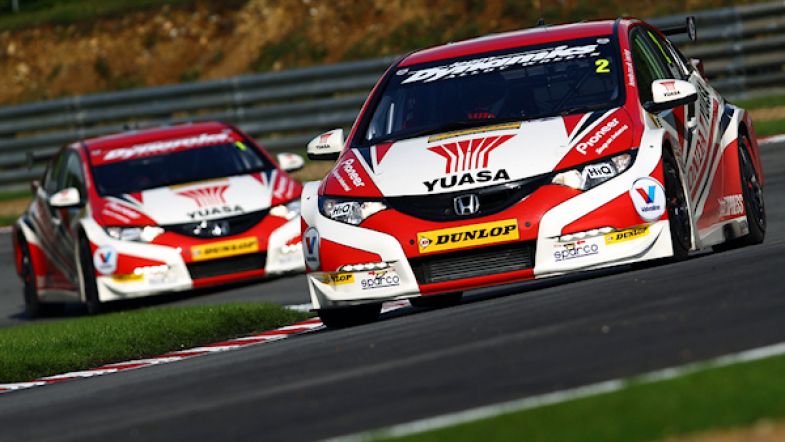 Honda to return with new car for 2014 season

Team Dynamics will defend its fourth consecutive manufacturers’ title in 2014, returning with an all new car next season, after Gordon Shedden narrowly missed out on defending his crown this year.

Styled as Honda Yuasa Racing Team, the Pershore-based squad will return to the BTCC, with full details of their programme to be announced next month. The team won the manufacturers’ title for the fourth time at Brands Hatch last weekend as well as the teams’ championship, with drivers Gordon Shedden and Matt Neal finishing second and fourth in the standings.

Both drivers both went into the season finale at Brands Hatch with a mathematical shot at the title, but Neal was eliminated from contention after an incident in race two which also took out Eurotech Racing’s Andrew Jordan, taking the title fight to the final race of the day.

Neal’s team-mate Gordon Shedden was drawn on pole for the reversed grid, and needed a win with Jordan not scoring to be able to retain his crown, and though Shedden was able to deliver that victory despite a valiant charge from Tony Gilham Racing’s Jack Goff, Jordan’s ninth place ensured the independent driver was able to lift his first title.

Following a crash in qualifying for Matt Neal, the 46-year-old was able to move forward from 16th to sixth in the first race, but an incident in race two effectively ended his championship challenge.

“I thought it all turned around after race one,” said Neal to TouringCarTimes. “The car felt really strong in race two, and then (Aron) Smith sort of turned Rob (Collard) around, and I was just on the inside of Andy (Jordan), and Andy had to jink left to avoid a head-on with Rob and that crippled me really and bent my suspension, then after the end the turbo went and the car caught fire.”

The team repaired the car for the final race of the day, but now with no windscreen wipers due to the damage in race two, Neal’s progress was hampered, finishing in 14th, 22 seconds behind the lead.

“As a team, we’ve won two championships and finished second in the other ones, and one of our cars has won the one we missed out on, so it’s been a pretty good year,” reflected Neal.

After two years with the current NGTC-specification Honda Civic, the team will run a new car next season, built to the NGTC regulations.

“The new car for next year will be announced next month, and one might be testing by the end of November,” said Neal.