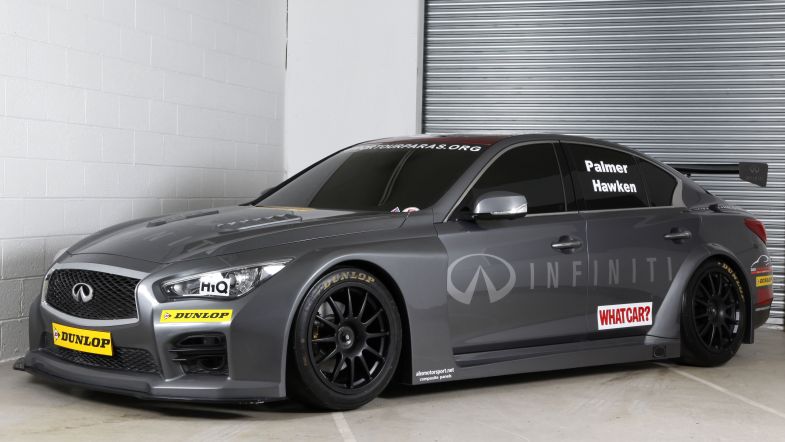 Infiniti to enter BTCC with Support Our Paras Racing

Infiniti will enter the BTCC in 2015 with the manufacturer backed Support Our Paras Racing team.

Support Our Paras Racing, run by Pro Motorsport, will use motorsport to support injured servicemen from the Parachute Regiment, and will bring a pair of Infiniti Q50s to the BTCC grid with Derek Palmer and Richard Hawken at the wheel, both of whom have recently competed in the HSCC Super Touring Car Championship.

“I’m extremely proud to be associated with the Parachute Regiment,” said Palmer, who has experience in FIA GT, British GT and European GT Championships. “I’m honoured to work with, and be associated with, the guys and to be part of the team entering the BTCC. Infiniti’s aspirations perfectly align with those of the team.”

Unveiled at St Lawrence Jewry, the principle Regimental church of the Parachute Regiment, the team outlined its aims to raise awareness and funds for the Support Our Paras charity. The team will be formed in part by injured Paratroopers, who will prepare the car for the race weekends and maintain them throughout the year.

The long term goal for the team is to see an injured Paratrooper in the driving seat of one of the two Q50s by 2016.

“We’ve set ourselves a number of significant, but achievable targets,” said Team Principle Derek Palmer Sr. “Of course we are aware of the challenges ahead of us, but with the united forces of The Paras and Infiniti, we believe we have the power to deliver results in the BTCC.”

The team have been granted access to the BTCC grid for 2015 by Series Director Alan Gow, issuing the team with a pair of TOCA BTCC Licences (TBL) that had been kept aside for potential manufacturer-backed projects. The cars will be powered by the TOCA-approved Swindon engine.

“It’s fantastic to welcome a new manufacturer to the BTCC and particularly a premium brand such as Infiniti,” Gow said. “There’s a great initiative behind the team too, with the ‘Support Our Paras’ charity being such a worthwhile cause. The record-breaking 2014 BTCC season concluded in fine style at Brands Hatch last weekend and the interest in the series continues to grow year-on-year. These entries from Infiniti are further testament to that and we look forward to welcoming the team to Britain’s best championship in 2015.”

The team will operate out of a newly-refurbished HQ at Mallory Park, and all profits generated by the team will be donated to the Support Our Paras charity.