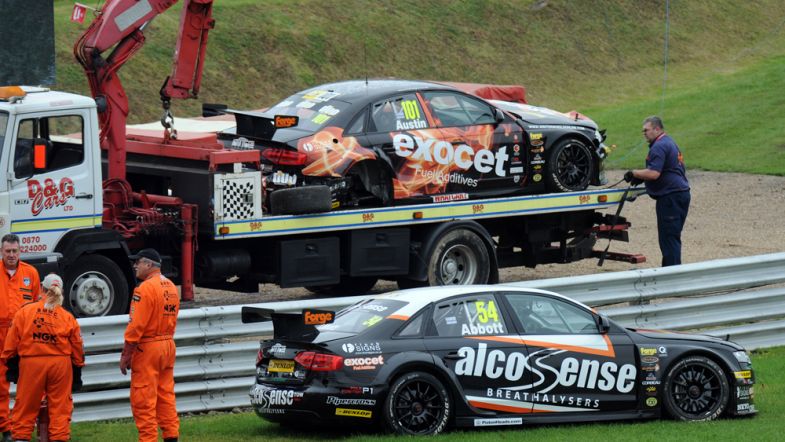 The Rob Austin Racing squad say they are already looking forward to the 2015 season, after a damage-strewn finals weekend at Brands Hatch.

Drivers Rob Austin and Hunter Abbott both suffered severe damage to their Audi A4s in a first corner pile-up in the first of three races on Sunday around the legendary Grand Prix circuit.

But thanks to swift repair jobs, Austin was able to take the start for race two, and Abbott rejoined in race three. And although the results didn’t match the hard work of the team, owner-driver Austin said he was already looking towards next season.

He said: “Sure Brands Hatch hasn’t gone to plan but what the team has shown yet again is an incredible fighting spirit to beat the odds and fix both cars so they could race again. The accident in race one left me wondering if either car would come out to play again but my team simply do not know when they are beaten – most teams would have called it a day but not us. What they did was incredible.

“It has been a season of highs and lows – the highlight of course being the win at Rockingham – but we’ve really held our own against bigger budget opposition in what has now grown into one of the three most competitive motor racing championships in the world alongside Formula 1 and NASCAR.

“From here we will go back to base in Pershore, rebuild both cars and then, for the first time thanks to our sponsors, look towards a proper winter testing programme to make sure we come back in 2015 even stronger and faster. I can’t wait for it to begin all over again.”

For his part, Abbott said he hoped to return to the team alongside Austin in 2015.

He said: “My first season in the BTCC has been a real baptism of fire, but I have to say that I have never enjoyed a season of motor racing as much in my life. I very much intend being back with Rob Austin Racing in 2015 and I am very much looking forward to all the planning and testing we have lined up in the winter months.

“There’s no other team I’d want to be with and I know from what is happening behind the scenes that we can be very competitive every time out next year. Like Rob, I have to thank the terrific team of people who work on my car – they have really been put through the ringer at times this season but every time have come out on top, refusing to be beaten.

“I’ve had to learn a whole new racecraft which is required in touring cars and there have been some desperately unlucky moments which haven’t reflected our true form, but I believe everything is in place for a really big year for Rob Austin Racing when we come back in early April.”