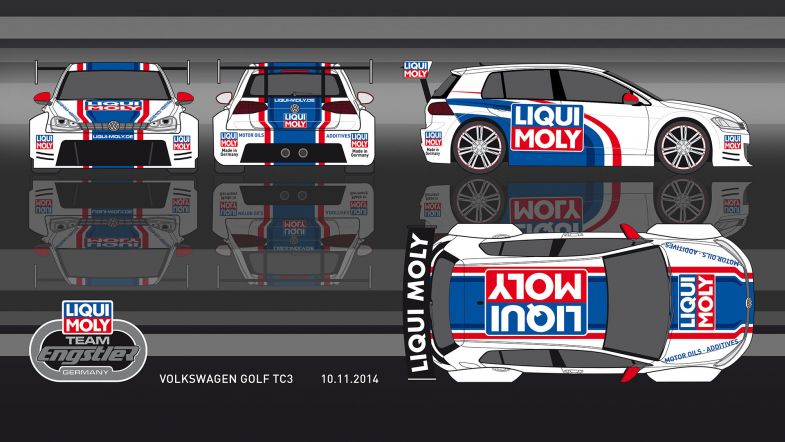 Engstler Motorsport to run Volkswagen Golfs in TC3 Series in 2015

Engstler Motorsport will leave the FIA World Touring Car Championship after eight years and join the new TC3 International Series and TC3 Asia Series next season, with the team planning to run Liqui Moly branded Volkswagen Golfs based on the SEAT León Eurocup platform in the new championships.

The German team, which won the 2011 and 2014 Yokohama Trophy titles with Kristian Poulsen and Franz Engstler, have raced with the Super 2000 specification BMW 320 in the Asian Touring Car Series, ADAC Procar, FIA WTCC and FIA ETCC in recent years, and plans to compete in the ETCC next year along with its programmes in the new-for-2015 TC3 championships.

“For us, we need a German brand. Mercedes is not able to offer us a car in 2015. Opel is a brand which could be available, but it’s not very well known in Asia, or in the UK where it’s Vauxhall, so Opel would not be the right choice. But we have the possibility to use the development from SEAT, as SEAT, Volkswagen and Audi are on the same platform, which makes it easier and quicker to get a car. So at the moment we hope to finalise a deal with Volkswagen, which is a brand which fits perfectly with Liqui Moly.”

The team will develop their Golfs based on the SEAT León Eurocup car, which was relaunched this season to much success, with 28 cars entered for the season finale at Barcelona.

The use of the Golf based on the SEAT platform also assists with the mix of brands on the grid, with the series’ organisers setting a maximum of six cars per brand on the grid for the International Series inaugural season.

“I must take my hat off to SEAT, as from what I’ve seen from all the developments I’ve seen in the past, they’ve done the cleverest development,” added Treml. “For example, the TC3 rules allow the weight of the car to be a little bit higher, so you don’t need to spend money on expensive carbon parts…for example, the air induct in our BMW is carbon fibre and costs 800 EUR, the same is there (on the SEAT) in fibreglass for 80 EUR, and from the spectators perspective it’s the same, as they can’t see the parts.”

The team have confirmed they will continue in the FIA European Touring Car Cup, in which they fielded a pair of normally aspirated BMW 320sis this season for Plamen Kralev and Christian Fischer, in order to make use of their three BMW 320 TCs which were raced by Franz Engstler, Filipe de Souza and Mak Ka Lok in Macau.

“We will use this car in the ETCC, so we have one year to use the investment as we have a lot of experience and parts for this car. This year we have been faster in qualifying each time this year than our pace last year, and if we set the time we’ve done at each race last year, we’d have always been in the top ten,” said Treml.

Alongside the TC3 International Series, Engstler will also return to the Asian racing scene, running cars in the TC3 Asia Series, which is yet to finalise its calendar.

“We will do TC3 Asia for sure,” said Treml. “In TC3 the market will grow so fast, and you must be in Asia. In Europe, it’s is not so easy to find the money for drivers and sponsors, but in Asia it’s much easier and it will be better and better each year, so, that’s the situation. We decided 12 years ago to do the Asian Touring Car Series, and we thought about why to do it, and since 2012 we’ve sold 12 cars to Asia, and as a private team you need to have a second hand market to support new programmes, as I have no manufacturer behind me.”

Franz Engstler, who will turn 54 in July next year, will continue to race for the team in the TC3 International Series in 2015,which begins in Sepang, Malaysia on 29th March, supporting the FIA Formula 1 World Championship.