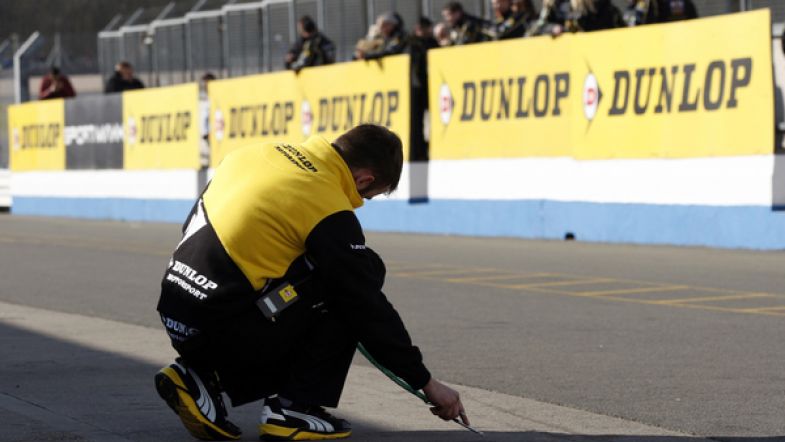 Behind the scenes in the BTCC with Dunlop

There are many jobs within a BTCC garage, be it general mechanic, technical director or driver, but one is often overlooked – the tyre technicians.

To find out more about the role, TouringCarTimes were invited to spend a race with Dunlop UK brand manager Mickey Butler in the Honda Racing Team garage to see what the boys in yellow and black get up to.

Joining the team for the second race at Croft, round 14 of the championship, we were first shown some essential data – the ambient and track temperatures. These are measured before each race in case there have been any changes and are the basis of all the tyre data calculations. Impressively, the North Yorkshire tarmac had warmed up by ten degrees in the two hours between the first two races.

Based on data gathered from the first race and drivers’ input, there were to be no changes on the set-up for Gordon Shedden, whereas Matt Neal had made a few tweaks to his car after the pair had finished fourth and fifth respectively.

Having made their way to the grid for race two all front-wheel drive teams diagonally cross their tyres, swapping the left front with the right rear, and the right front with the left rear. This allows the rear tyres to have heat in them as all the work is done by the front wheels – by the time the cars have completed the final pace lap they will come to the grid with all tyres having similar temperatures and grip levels. 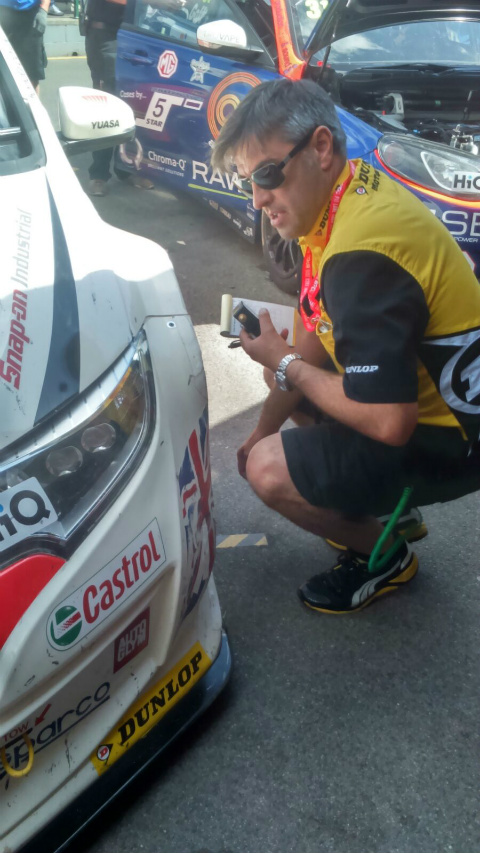 The job for Butler then lies in taking the pressures and temperatures, which on this occasion saw Shedden’s tyres measuring 50 degrees on the rear, while Neal’s were sitting at 45 degrees. The figures back up what Butler said later in the day, in that Shedden tends to be tougher on his tyres than Neal, with the latter being a smoother driver compared to the Scotsman’s aggressive driving style. The numbers are then relayed to the drivers, allowing them to have an idea of what level of grip they can expect heading in to the all-important first corner.

Once the grid procedures are complete, there is nothing to do but watch while Shedden and Neal do their job. It isn’t a simple case of sitting back and watching the television, however, as a close eye is kept on the timing screens, monitoring not only the times of the Honda duo, but of all their rivals, particularly anyone who may be running the softer compound tyre which is mandatory for one race per meeting.

Neither Shedden or Neal were running the softs in this particular race, both electing to use it in the final race of the day. The reasoning behind the choice was down to the abrasive nature of the Croft circuit, which had already seen rivals Jack Goff, Rob Austin and Jason Plato struggle on the softer rubber in the first of the three races.

Honda reasoned that by the time of the final race the circuit would have gained as much rubber on it as possible, thus making life easier for the tyres, or at least as easy on tyres as Croft can be. This level of planning is not replicated across the entire paddock however, as when we asked Mike Bushell how he chooses which race in which to run the soft tyre, the response was “I toss a coin!”

Getting back to race two, Honda enjoyed mixed fortunes with Shedden taking a hard-fought fifth place while Neal could only manage to finish in 11th. A hair-raising moment for Shedden saw him make contact with Rob Collard in the run to the Jim Clark Esses, nearly resulting in a high-speed incident between the two and the reason behind a rather loud scream from his wife Jillian Shedden in the Honda garage.

Once the race is over, it’s action stations for Butler once again, who takes the temperatures of the tyres the moment the cars arrive back in to the garage. As a matter of fact, he’s the only person allowed to touch the cars, parc ferme rulings keeping the mechanics away from them when they first return to the garage.

After the cars are taken out of parc ferme, the focus for Butler now lies in finding out how the tyres have performed throughout the race in terms of wear. Handing Neal’s left-front to a young technican, the tyre is then shaved by a device that looks like a hair-dryer with a blade attached to it, scraping off the top layer of rubber. By doing this, the team can monitor the levels of wear that the tyres have been put under, looking for even wear across the board. 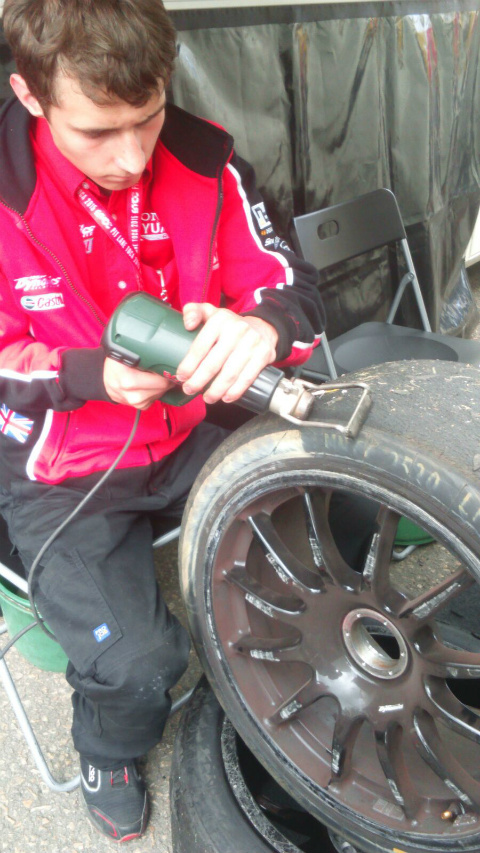 In fact on this occasion Neal had been lucky to make it to the end with all four tyres, not through excessive wear, but through damage caused by contact with a rival on track. The front bodywork of the #25 Honda Civic Type-R had cut deep in to the tyre, with Butler turning to Honda team boss Barry Plowman and simply saying “that was close…”.

Aside from the damage to Neal’s left-front, the wear on his two front tyres were even, as were the tyres of Shedden, albeit slightly more worn due as earlier indicated to the Scot’s harder driving style.

Once the information has been gathered from the previous race, it’s immediately time for the team to turn their attention to what’s next. In this case, it was race three and the soft tyre for both of the Honda drivers.

Some slight setup changes are required for running the softer rubber to try and extend its life, and as had been seen earlier in the day, Croft was proving quite difficult for soft tyres after 10 laps or so.

The plan to run the softs in the final race of the day, along with the slight setup alterations appeared to work for Shedden, who rounded off his day with a trip to the podium, leaving North Yorkshire with a ten-point lead in the championship. Meanwhile, Neal was unable to match the pace of his teammate, having to settle for ninth at the chequered flag.

And it was another good day’s work for Mickey Butler and his Dunlop Tyres team, just some of the many behind-the-scenes experts that most BTCC fans take no notice of, but with which the BTCC could not do without.