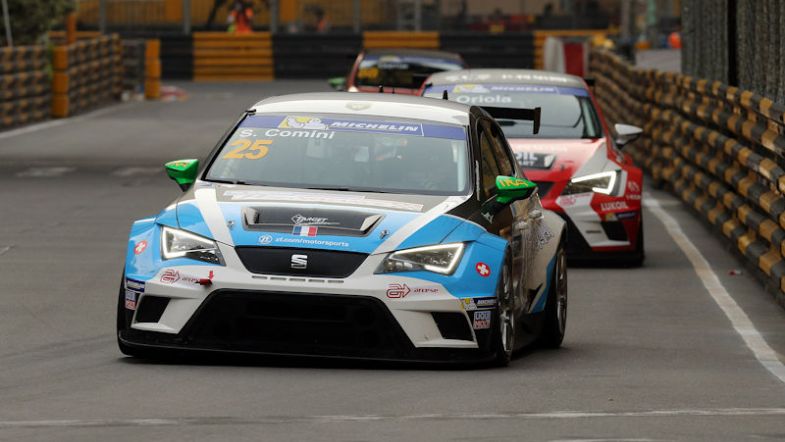 Target Competition’s Stefano Comini won the Guia Race of Macau and the inaugural TCR International Series’ drivers championship in a race of pure carnage, which saw seven cars finish the race from an original 30 car entry.

With incidents aplenty in Race 1, the field was reduced to 20 cars at the start of Race 2 with WestCoast Honda driver Rob Huff starting from pole position with Craft-Bamboo Racing’s Jordi Gené alongside, with title protagonists Stefano Comini and Pepe Oriola starting on row two.

At the start there was a massive pile-up at the first turn, with Gené and Huff fighting for the lead. Gené slid wide and made contact with Huff, with both propelled into the wall which started a chain reaction which eliminated a further nine cars, including Lorenzo Veglia, Sergey Afanasyev, Kevin Gleason, Josh Files, Suny Wong, Henry Ho, Guilluame Cunnington, Samson Chan, Michael Choi.

The race was now led by points leader Stefano Comini in the Target SEAT, with title rival Pepe Oriola right behind in the Craft-Bamboo SEAT, and as the two battled towards Lisboa the inevitable red flags were waved.

At 11:45 the race was restarted with a fledgling nine cars left from the originally scheduled 30 car entry for the weekend.

Comini was now the race leader, while Pepe Oriola needed to win to keep his title hopes alive with the Swiss not finishing any higher than third.

Gianni Morbidelli restarted third on the road in the only remaining WestCoast Racing Honda of the four that started the race, but he was given a drive-through penalty which dropped him down the order, but would battle his way through the diminished field to eventually finish fourth.

Morbidelli’s penalty promoted Jordi Oriola to third on his Macau debut, and the younger Oriola was fighting a rear-guard action for his brother, despite the conflict in driving for the rival Target team.

Comini lacked pace over Oriola, and was defending hard against the Spaniard at Lisboa on every lap. The two made contact when fighting side-by-side through the 90 degree right-hander on lap six, while Oriola mounted a final charge on lap eight as Comini made a mistake at Mandarin.

However, Oriola ran into the back of Comini’s SEAT while lining up a pass at Lisboa, which saw him stop shortly after with damage, while younger brother Jordi Oriola also stopped with damage from a separate incident, promoting Andrea Belicchi to second, and reducing the number of runners to just seven cars.

Comini went on to finish the race and therefore win the drivers’ title with a 32 point margin over Oriola in the standings, and with no Craft-Bamboo cars finishing the race and with Target scoring a 1-2, the Italian squad also lifted the teams’ title by 23 points.

The video of the start crash which eliminated over half the field including eight-time Macau winner Rob Huff is below: