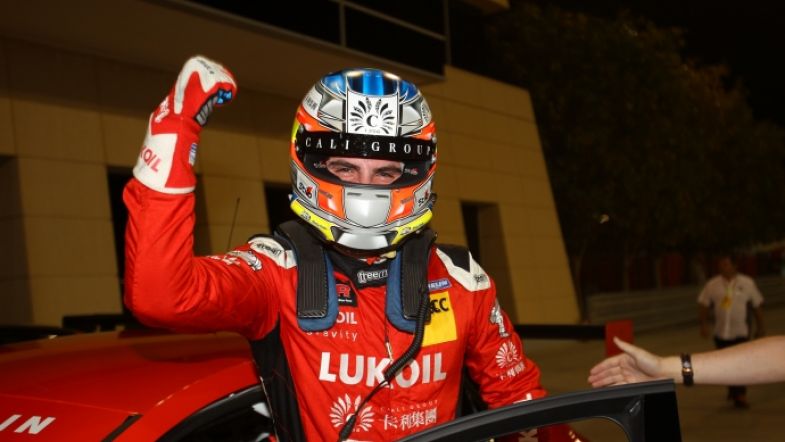 Pepe Oriola won the second race in Bahrain after an intense battle for the lead. The Craft-Bamboo Lukoil driver came home ahead of team-mate James Nash, with WestCoast Racing’s Aku Pellinen completing the podium in his Honda Civic TCR.

At the start the WestCoast Racing Hondas were the protagonists, with Kevin Gleason taking the lead ahead of Aku Pellinen. Jean-Karl Vernay was in third ahead of Pepe Oriola. Drama started very soon when 2015 champion Stefano Comini made contact with Liqui Moly Team Engstler’s Mikhail Grachev, his Leopard Racing Golf Gti TCR picking up a puncture in the contact and forcing the Swiss out of the race.

A fight between Oriola and Pellinen for second meant the pair were side by side on the main straight, but James Nash took advantage to jump up to second by passing both drivers in a very spectacular yet clean move. At that point Gianni Morbidelli had made it up to the leading pack and quickly overtook team-mate Aku Pellinen, despite the Finn’s efforts to resist.

Jean-Karl Vernay was handed a black flag, his rear bumper flapping behind his Leopard Racing Volkswagen. The Frenchman entered the pits, ending a bad day for the Belgian team.

Towards the end of the race Oriola muscled his way through Gleason, with Nash following the Spaniard through. The American then tried to defend from Morbidelli, but a brake failure forced Gleason to retire. More drama was to come as Morbidelli picked up a puncture and had to give his place to team-mate Pellinen as he slipped down the order.

Oriola therefore won the race ahead of Nash and Pellinen, with Borkovic in fourth after a series of superb moves to climb up the order. Davit Kajaia made it to fifth in his Volkswagen Golf Gti TCR, making it three manufacturers in the top five for Liqui Moly Team Enstler. B3 Racing’s Mat’o Homola finished sixth after a battle with team-mate Borkovic, with yesterday’s pole sitter Sergey Afanasyev in seventh for Craft-Bamboo Lukoil.

Jordi Oriola gave the Opel Astra TCR its first points by finishing eighth ahead of Gianni Morbidelli’s crippled car, with Luigi Ferrara claiming the final point for Top Run in his Subaru. Michela Cerruti stopped on the track in her Alfa Romeo Giulietta TCR and retired.

The TCR International Series will now head back to Europe for the second event of the season in Estoril, Portugal, in three weeks.