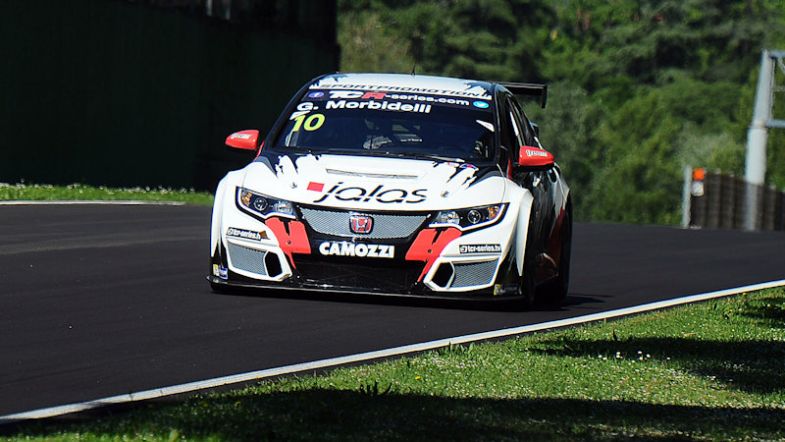 WestCoast Racing’s Gianni Morbidelli led the second practice session at the Salzburgring circuit, poaching a slipstream from the B3 Racing SEAT Leóns of Attila Tassi and Mat’o Homola to drop Craft-Bamboo’s Sergey Afanasyev to second by the chequered flag.

The reigning ETCC Single-Make Trophy champion was then dropped by Target Competition’s Jordi Oriola, who was the first to go faster than Kevin Gleason’s pole time of 1:26.915 from 2015 in his Honda Civic TCR, before Sergey Afanasyev put in a late improvement to go fastest of all with a time of 1:26.744 in the Craft-Bamboo Racing SEAT León TCR.

The Russian’s time didn’t stand for long though, as Morbidelli found a slipstream from the back of the two SEATs of Tassi and Homola, who were working on their qualifying strategy. Morbidelli went fastest with a time of 1:26.637, with Afanasyev and Jordi Oriola completing the top three, with Borkovic having to settle for fourth.

The Volkswagens and Alfa Romeos both had a tough session, with Michela Cerruti suffering with a transmission issue on her Giulietta TCR, and Petr Fulín spending much of the session in the pits with a damaged splitter, with both cars finishing 15th and 16th and last.

The Volkswagen Golfs were all off the pace, with Jean-Karl Vernay fastest for Leopard Racing in 11th, leading the other three cars of Davit Kajaia, Florian Janits and Stefano Comini down to 14th.

“I did a very good lap at the end, but it’s really difficult as all the drivers are very close,” said Moridelli. “We still have to work a bit on my set-up, I’m not 100% sure this will be the set-up for qualifying. We’ve done great until now, so we’ll try and stay in this position.”