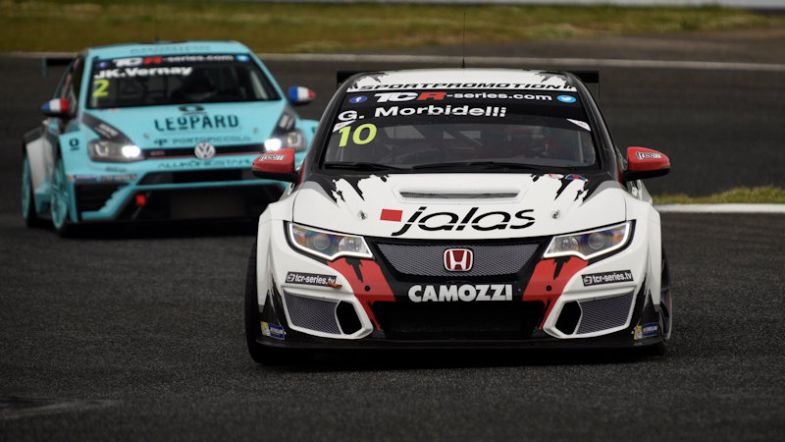 WestCoast Racing’s Gianni Morbidelli was fastest of all in the first free practice session at the Salzburgring in his Honda Civic TCR, setting a time within a tenth of a second of last year’s pole record, which was set by former team-mate Kevin Gleason

Morbidelli led the way throughout much of the 30-minute session at the Salzburgring circuit in Austria, only briefly deposed at the half-way point by the Target Competition-run Honda Civic TCR of Jordi Oriola. The Spaniard would end up as second fastest at the end of the session, just two-tenths behind the Italian.

The third fastest driver was WestCoast Racing’s new signing Harald Proczyk. The TCR Germany points leader was just half a second from team-mate Morbidelli’s best lap of 1:27.050 on his home circuit.

The fourth fastest time came from championship leader Pepe Oriola, who was also the best placed of the SEAT León TCRs driving for Craft-Bamboo Racing, just ahead of the B3 Racing-run SEAT of Attila Tassi, with Bamboo team-mate James Nash in sixth.

Florian Janits, making his TCR debut this weekend, and the second Austrian driver in the field, was seventh fastest and the quickest of the Volkswagen Golf GTI TCRs for Engstler Motorsport, with the Bamboo SEAT of Sergey Afanasyev eighth and the B3 Racing SEAT of Dusan Borkovic ninth, after the Serbian missed the first half of the session due to a technical problem.

Tenth fastest was the revitalised Alfa Romeo Giulietta of Petr Fulín. The ETCC points leader was 1.3 seconds from the ultimate pace from Morbidelli and had a trouble free session, while there was an issue for team-mate Michela Cerruti at the end of the session, with the Italian sliding off at Turn 1 with five minutes to go, with yellow flags preventing any late improvements.