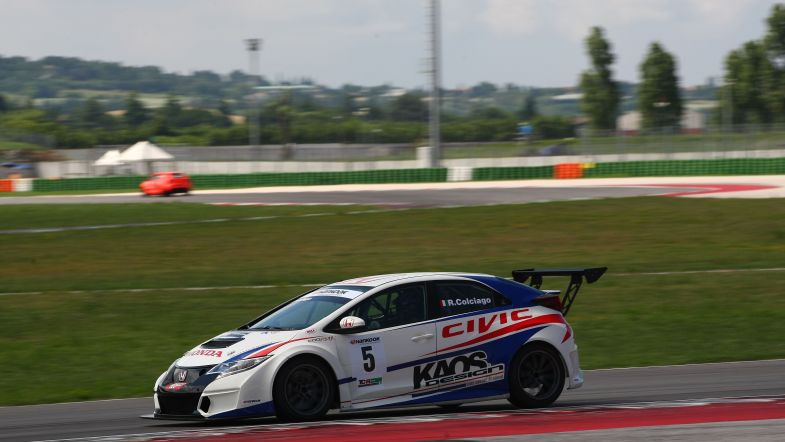 Roberto Colciago took his AGS Honda Civic TCR to its third win of the season in the TCR Italy round at Misano, despite starting from the back of the grid. The former STCC champion came home ahead of BF Racing’s Imerio Brigliadori, who started on pole, and team-mate Samuele Piccin, who completed the podium in his SEAT León Racer.

Colciago started from the back of the grid as he skipped qualifying while AGS changed the engine and the gearbox on the Honda, with Alberto Viberti alongside him in the BRC Racing SEAT, who also suffered from a technical problem in qualifying.

At the start Piccin took the lead from team-mate Brigliadori, as both Viberti and Colciago quickly got rid of the TCS field and started making up places, with the BRC Racing driver ahead of the Honda.

It took the pair little more than one lap to get to second and third respectively, but Piccin put on a fierce defensive drive for two laps, until both Colciago and Viberti got through him and started fighting very closely.

As Colciago struggled to get past Viberti suddenly slowed down at Turn 3, leaving Colciago to inherit what had now become a comfortable lead. The BRC Racing driver returned to the pits to retire, leaving Piccin in second ahead of Brigliadori on the sixth lap.

There was time for another fight, as Brigliadori caught Piccin and overtook his team-mate on Lap 7, while Daniele Cappellari also retired due to a technical issue, adding to SEAT’s bad day.

Massimuo Arduini won the TCS class in his Peugeot 308 MI16 after Andrea Bassi stopped in the pits due to an issue on his SEAT.