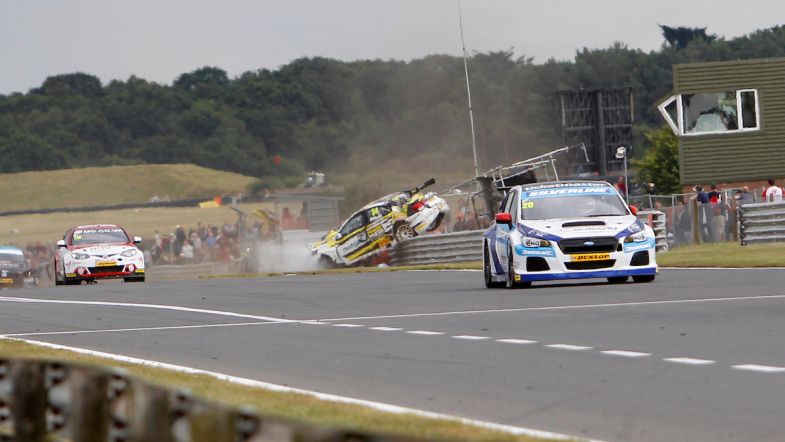 Hunter Abbott has ‘every faith’ in PMR making Knockhill

Hunter Abbott says he has every faith that his Power Maxed Racing team will get him on the grid for the next round of the BTCC season at Knockhill, despite his involvement in the two major on-track incidents at Snetterton.

Abbott’s Chevrolet Cruze suffered extensive damage after a frightening roll in the final race of the weekend, having only just been repaired following the multi-car accident in race two.

On both occasions, Abbott was little more than an innocent bystander caught up in others incidents, but his team now faces a race against time to get his car prepared for the long journey to Scotland.

Despite the need to leave early due to the travel involved, Abbott said he was hopeful that the Power Maxed crew would get the job done and allow him to race in the seventh meeting of the year.

“WSR had a similar problem with Rob Collard a few years back when he had his accident at Silverstone and they were working round the clock to repair his car, so we know it can be done. However, Knockhill is probably the worst meeting to have next because of the distance involved in getting there, so it’s going to be tight.”

For Abbott, the events of race day would prove to be doubly frustrating as they came after an opening race where he has posted the fastest lap for the time in his BTCC career – having qualified inside the top six for the first time on Saturday.

“It’s so frustrating as there was nothing I could have done,” he said. “Okay so I lost a few places at the start of race two and maybe I could have gone left rather than right when Dan Welch and Ollie Jackson got together, but you have a split second to make the decision and that was the way I went. It was just unfortunate that Ollie came back across and I collected him.

“The team did a great job to get the car out for race three and then all of a sudden, Alex Martin and Mark Howard collected each other and again, I had nowhere to go and my race was done before I’d even crossed the line to start it.

“When I clipped Mark’s car and it started to go over, I just thought ‘I can’t f***ing believe this’. I’ve rolled a car before, and have landed on top of the barrier before, so I knew what to expect and I was just hoping that I wasn’t going to go over it into the crowd.

“I wasn’t even aware until I left the medical centre later that I’d hit the camera gantry as that was the point when someone told me it had gone over, and it was just the worst feeling imaginable. As drivers, we sign up to do this and are aware of the dangers but we are prepared for them. People like the cameraman and the spectators trackside aren’t – they don’t have the roll cage and safety things that we have to protect them.

“The car stood up really well to the impact which allowed me to come out unharmed, and I’m so thankful it was the same for everyone else too.”