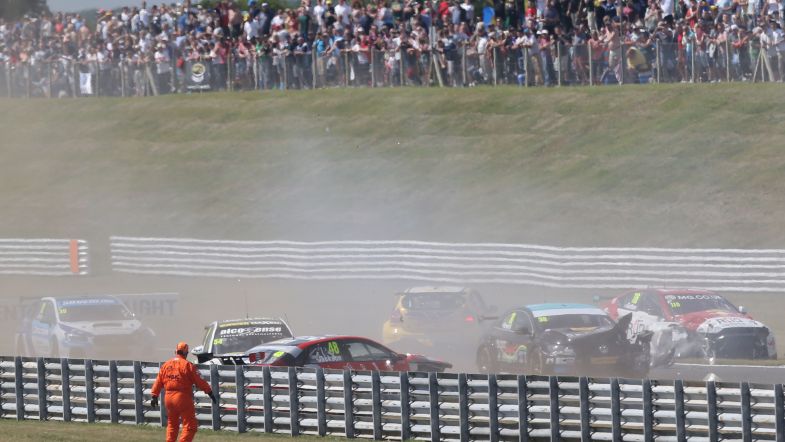 Triple Eight boss Ian Harrison has hit out at driving standards following the incident packed sixth round of the BTCC season at Snetterton.

Having seen both of his cars left towards the back of the field for race two after punctures in race one, Harrison could only watch on as Ash Sutton got caught up in the dramatic multi-car accident that occurred on the opening lap of race two.

The Croft race winner sustained heavy damage when was unable to avoid the spinning Proton of Dan Welch, with the MG team facing a race against time to ensure Sutton was able to take his place on the grid for race three.

Then, the rookie was lucky to avoid being caught up the incident that occurred within seconds of the start; bringing out the red flags for the second time in three races.

With a number of other incidents between drivers on race day, Harrison admitted he was far from impressed with some of the driving on display, admitting that there were people on the grid who ‘shouldn’t be driving in the championship’.

“It’s true that rubbing is racing in the BTCC, but there comes a time when the level sinks so low that you have to question whether some people who are racing in the championship should actually be racing in it,” he said. “The bottom line is that it is a difficult job to be quick and consistent in British Touring Cars and some of the guys who are out there are the moment just aren’t good enough – they should go off and do something else.

“This isn’t a series where you can be out of your depth and you have to expect there to be racing at close quarters with other cars. If you don’t know where those other cars are because you are hanging on for dear life or using all of your faculties just to keep the car on the track, then you have no place being here.

“Even though this has been our worst weekend of the season, I don’t want people to think I’m moaning just because we’ve had a shit weekend, because that isn’t the case. You make your own results in this game and sometimes it doesn’t go your way, but you don’t need a helping hand from people who aren’t up to the job to make that the case.”

Questioned as to how standards could be improved, Harrison suggested that the current criteria required to enter the series was something that could be looked at to ensure that the right quality of drivers are to be found on the grid.

“Maybe we need to look at things and see if the licence you need to compete in the championship should be different to the licence you need now,” he said. “It could be time to say that you have to have done x, y and z in order to qualify to race in the series, because as the moment, some of the drivers are just not qualified for this championship.”