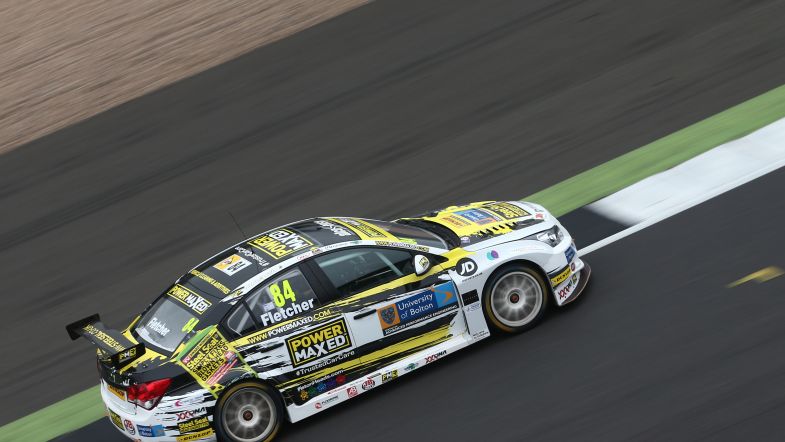 Returning Power Maxed Racing driver Kelvin Fletcher reaped the rewards of working with a new driver coach for the first time after celebrating his return to BTCC action with his best qualifying result to date.

Having missed the meetings at Knockhill and Rockingham whilst awaiting the arrival of his first child, Fletcher enjoyed a solid day start to the Silverstone weekend, going 17th quickest in practice before qualifying inside the top 20 for the first time.

Ultimately Fletcher would end up less than a tenth of a second behind championship leader Sam Tordoff on the times and qualified one place ahead of fellow title contender Mat Jackson, although he insisted that he could have been even higher without traffic on one of his quicker laps.

“On paper, it’s been my most successful qualifying session but I also feel there was more time in it,” he said. “I hit traffic a few times and I think I could have got down to a 58.8s, which would have put me inside the top twelve.

“Despite that, I’m feeling confident for the races as I think I’ve shown already this season that my race craft is improving. I’ve only made one mistake this season that has resulted in a DNF; any others have come through either a mechanical issue or getting punted off by someone else.”

Of assistance to Fletcher ahead of the weekend was the opportunity to work with a driver coach for the first time, with Martin Plowman – winner of the LMP2 title at Le Mans and in the World Endurance Championship in 2013 – having provided guidance in the run-up to the Silverstone meeting.

“I’ve never worked with a driver coach before and have been self-taught, so the opportunity to spend some time working with Martin has been really beneficial,” he said. “It’s helped a lot in terms of how I look at things and in finding that extra little tenth of a second, which is particularly important at a circuit like Silverstone where things are so close.

“The bar keeps getting raised for me but I’m staying realistic in my expectations. I want to try and push forwards tomorrow and I think I can challenge for my first points finish.”