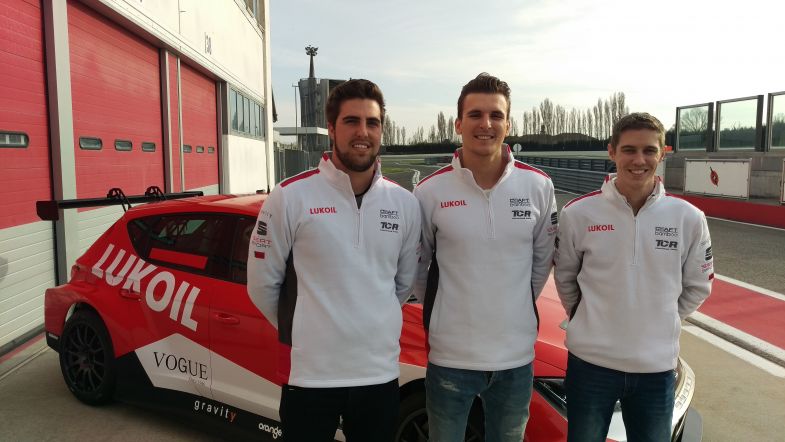 Hugo Valente has made the switch from the World Touring Car Championship to the TCR International Series for 2017, joining the UK and Hong Kong-based Craft-Bamboo Racing squad alongside 2016 series runner-up James Nash and 2015 runner-up Pepe Oriola.

Valente leaves the WTCC after four years, after last season having secured a factory drive with the now defunct Lada Sport team. The 24-year-old Frenchman replaces Russian driver Sergey Afanasyev at the team, which will still retain title sponsorship from Russian firm Lukoil as they chase their first drivers’ title.

“I’m very excited for this new challenge, as it has been a long winter and I wasn’t sure if I would be given the opportunity to race again in 2017,” said Valente.

“For me it was important to get back to the front end of the field, I wanted to be able to fight for podiums and victory at every event. I’ve seen the way Lukoil Craft-Bamboo Racing works, and to me it’s possibly the best opportunity that I’ve been given in the past couple of years.

“They’re established in the TCR international Series and have won the teams’ title last year, so we’ll be the guys to beat but we definitely need to focus on bringing back both titles this year.”

James Nash will be entering his second full season in the series, narrowly missing out on the title last year after a tough finale at the Guia Race 2.0T in Macau. The Brit will be hoping to go one better this year, though with last year’s champion Stefano Comini presently without a drive, his main championship rival this year could well come from within the team.

“I’m really pleased to have signed for Lukoil Craft-Bamboo Racing,” said Nash. “Together we came so close to winning the drivers’ title last season, my first back in touring cars after two years away racing GTs. I felt we had really gelled as a team
towards the end of last season and had real momentum so it’s great that we’re
able to continue together.”

“I know that we’ll face fierce competition this year. In readiness the team has
been hard at work over the winter trying to find time in the SEAT León and
making improvements to what was already a very strong car while I’ve been
working hard too on my own personal fitness. I don’t think I’ve ever felt as ready
and excited for a racing season ahead as I do right now and I am so determined
to go one better than last year and win the TCR International drivers’ title.”

Pepe Oriola took four wins on his way to fourth in the drivers’ standings last year, a title contender for the second year in a row until the end. The 23-year-old Spaniard continues his association with Craft-Bamboo and SEAT, and is also likely to be a front runner for the drivers’ title.

“I am so excited to race with Lukoil Craft-Bamboo Racing again as it’s my third year in the family and it feels like a real family,” said Oriola. “With my two team-mates I hope we can win the teams’ championship and finally win the drivers title too. I have to give a big thanks to SEAT for the support they are giving to me and to the team.”

“I would like to welcome Hugo Valente to Lukoil Craft-Bamboo Racing. He has shown his ability in touring cars over the past four seasons and I am sure that he will be able to adjust to the SEAT Leon fairly quickly and begin to challenge at the sharp end of the grid.

“I am proud to have James Nash and Pepe Oriola back for another season as well. They have a strong history of success with the team and I expect them to be competing at the very top of the competition in 2017 while in pursuit of both championship titles. Put simply, I think any one of my drivers is capable of winning the championship this year.”