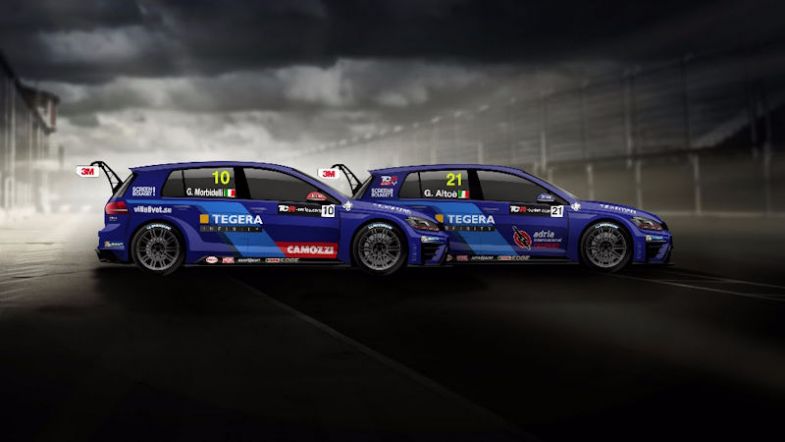 Swedish touring car outfit WestCoast Racing have revealed the all-blue livery which will adorn their Volkswagen Golf GTI TCR cars for the 2017 TCR International Series. The team competes this year with an all-Italian line-up of Gianni Morbidelli and Giacome Altoe.

The two Golfs will run with a new suite of sponsors, after WestCoast Racing split from former partner Sportpromotion for the purposes of its international TCR programme.

The team’s new key sponsor is Tegera Infinity, while Morbidelli’s long-time sponsor Camozzo will appear on the 49-year-old’s #10 car, while team-mate Altoe will run #21, with backing from the Adria International Raceway.

After switching to Volkswagen after two years with Honda, the team know they have a tough challenge ahead of them this weekend in Georgia.

“We are racing our new car for the first time against teams that have been running their cars for a year or two already,” said team manager James Nixon.

“I know Gianni is as hungry for wins as ever, but we have accepted that it will be difficult for us in this early part of the season. We need to learn all about and understand our new car and be patient. Over the season, we need consistency. We have won more races than anyone in TCR International, but now we need a title.

The team have added youth to experience in their line-up by signing Altoe, the 16-year-old already having made his TCR debut in the Middle East series in the Top Run Subaru WRX STi.

“Giacomo drove with us on a shakedown and I must say how impressed I was by him,” added Nixon. “He has a very wise head on very young shoulders and I look forward to see his development throughout the year.”