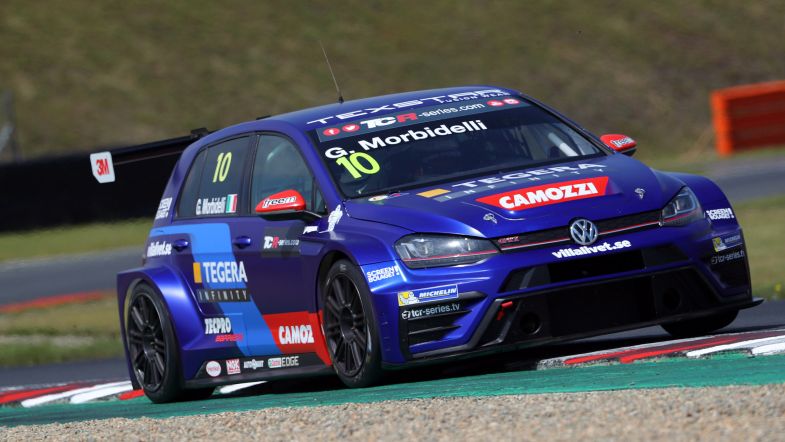 Morbidelli made the perfect getaway from pole in the WestCoast Volkswagen, while Dan Lloyd slotted into second in the Craft-Bamboo SEAT, with Jaap van Lagen going side-by-side in Turn 1 with Team WRT Volkswagen team-mate Rob Huff, with Huff emerging as the winner as van Lagen dropped down the order.

Behind though there was trouble, as the M1RA Honda of Attila Tassi dived down the inside of the other WRT Volkswagen of Jean-Karl Vernay, spinning the Frenchman around and relegating him to last.

Vernay was working his way up the order and caught Tassi on lap four, but then ran into the rear of the Hungarian’s Civic at Turn 14, knocking him into the gravel trap and forcing out the safety car.

When the race resumed, Vernay was quickly handed a drive-through for what was deemed a retaliatory attack by the stewards, with Vernay soon serving his penalty before choosing to retire from the race.

Jaap van Lagen was now in fifth, but was hit by Pepe Oriola’s SEAT and knocked wide, dropping to 11th. Oriola was also given a drive-through by the stewards for the incident, which saw the Spaniard finish 19th and well outside of the points.

Van Lagen was on the warpath to recover positions, but while battling the DG Opel of Mat’o Homola at Turn 1, allowed the Comtoyou Racing Audi of Stefano Comini through the pair of them and up to what would effectively be sixth position.

Homola managed to hold Van Lagen off to the end of the race to keep seventh, while Danny Kroes capitalised after the SEAT of Stian Paulsen was given a black flag for excessively exceeding track limits, with the 17-year-old scoring points on his TCR debut from 20th on the grid, while Frédéric Vervisch went from last to tenth to pick up the final point in his Audi RS 3 LMS.

Honda had a disaster of a race with all cars running into trouble, with M1RA’s Roberto Colciago and Reno Racing’s Jens Møller both suffering punctures, while Boutsen Ginion’s Aurélien Panis retired from 11th at the final turn with an engine failure.

Championship leader Attila Tassi was black flagged after he rejoined the race, but still maintains a six-point lead over team-mate Roberto Colciago in the standings, after just four of the top five title contenders scored in the race.