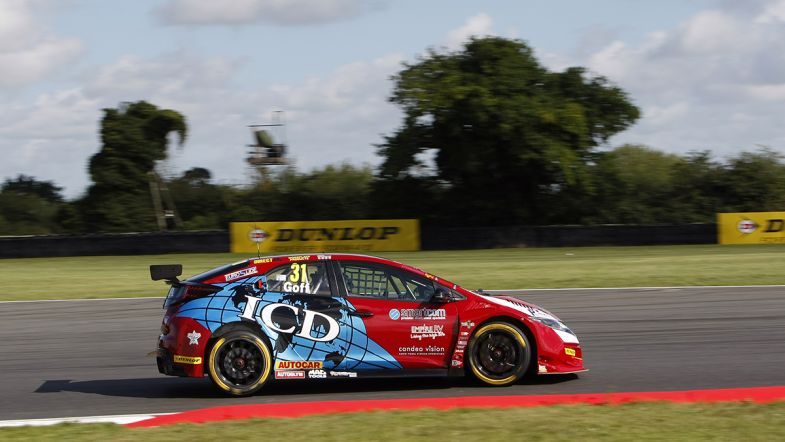 Goff set his best time of 1.56.504 inside the final five minutes of the session in his Honda Civic, with Price’s lap coming within the final two minutes in his Team BMR Subaru Levorg.

Ciceley Racing’s Adam Morgan and Speedworks Motorsport’s Tom Ingram were third and fourth having traded times at the top for much of the session, with the second Team BMR Subaru of Ash Sutton next up in fifth.

Rob Austin, Josh Cook, Mat Jackson, Aiden Moffat and Matt Neal rounded out the top 10 in a session where times were significantly slower than this morning, with Goff’s best time 0.5s slower than Ingram managed in the first session.

“It’s free practice and means nothing until qualifying, and we’ve definitely got a bit more time to find in our car,” said Goff afterwards.

The session was stopped for seven minutes when Matt Simpson went off at the end of the Bentley Straight (pictured) after 13 minutes, his Honda Civic Type-R hitting the barrier backwards. 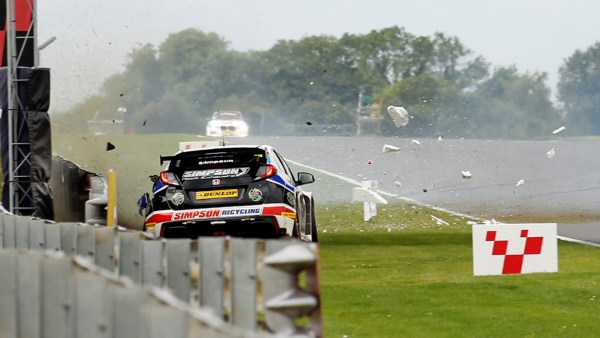 Elsewhere, championship leader Gordon Shedden was marooned down in 26th in his Team Dynamics Honda Civic Type-R, while all three West Surrey Racing BMW 125i machines were also outside the top 10. Colin Turkington was the best placed in 12th, with Andrew Jordan 17th and Rob Collard 18th.

Rookie Brett Smith was an impressive 13th in the second Eurotech Racing Civic, having spent much of the session at the foot of the times without a lap on the board.

Next up for the BTCC drivers is this afternoon’s qualifying session, which gets underway at 15:50 BST.