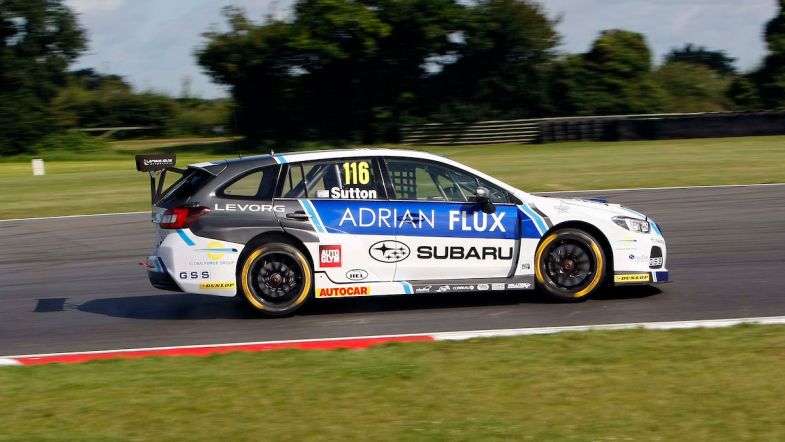 Sutton forced his Subaru Levorg down the inside of polesitter Goff’s Honda Civic Type-R at Hamilton and streaked away to win by more than two seconds, and has now closed to within two points of series leader Gordon Shedden in the championship standings.

However, the battle between Sutton and Goff would have likely been for the lower podium spots had West Surrey Racing’s Turkington not spun out of the lead at the Bombhole on the fifth lap. The BMW 125i dropped into the midfield, with the Northern Irishman eventually recovering to seventh.

Behind the top two, Team Dynamics’ Matt Neal held off the fast-charging BMW of Andrew Jordan and Subaru of Jason Plato to take third, with Jake Hill an excellent sixth for Team Hard.

Team Dynamics’ Shedden fought back to finish 13th and just maintain his championship lead, while several drivers were left with tales of woe after a bruising encounter.

Debutant Brett Smith retired his Honda Civic with left front damage on the opening lap, while Team BMR’s Josh Price was penalised for a jump start and later retired with heavy front-end damage.

Next up in the firing line was Ingram, with Austin forcing his Toyota Avensis down the inside of his stable-mate at Agostini on lap six which saw both drivers take to the grass. Ingram was able to rejoin, but Austin retired in the pits.

Ciceley Racing’s Adam Morgan slowed at the Bombhole and retired with driveshaft failure, with Team Hard’s Mike Epps also losing a top 10 when he slowed at the same corner.

Shedden then made contact with fellow Scotsman Aiden Moffat on the final lap to end a chaotic race, dropping from 11th to 13th, with Moffat falling to 19th. The Scotsman now leads the standings by two points from Sutton, four from Turkington and seven from Collard ahead of race two at 14:07 BST.