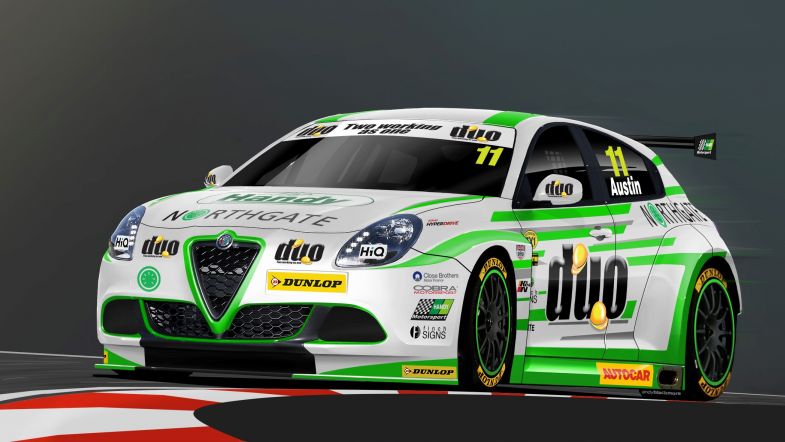 Handy Motorsport brings Alfa Romeo back to the BTCC

The Alfa Romeo name will return to the BTCC grid for the 2018 season after Handy Motorsport revealed plans to run a new Giulietta next year.

The car, which is being entered with the blessing of Alfa Romeo and with support from the UK dealer network, will replace the Toyota Avensis that has been used by the team since it debuted in the series back in 2014.

Experienced car builder Willie Poole has already started work on the initial fabrication work on the Alfa Romeo shell, which will then be returned to the team so that the build can be undertaken in-house at its Swindon base.

The switch to the Alfa Romeo comes more than two years after team boss Simon Belcher first approached Alfa Romeo about the possibility of building an NGTC-spec car.

The Italian manufacturer had also featured at the top of Rob Austin’s list when he was considering his options once it became apparent that he would need to move away from the Audi A4 he had run with his own team from 2011 through to 2015.

Austin, who has now driven for Handy for the past two seasons after merging his team with Belcher’s ahead of the 2016 campaign, will continue behind the wheel.

“It all dates back to the point when we realised that we were trying to shovel shit uphill with the Audi,” Austin told TouringCarTimes. “We looked around at what was available and I’ve always been a massive fan of the Alfa Romeo brand.

“We looked at their range and the Giulietta just fitted the regulations perfectly; the short wheelbase is ideal for the tracks we race on. We saw the potential of the car and it was the number one choice, if we had a choice to make.

“At that point, we elected to merge with Simon and Handy, and part of that was down to the fact that Simon had a contact with Alfa Romeo and had been speaking to them already about the possibility of doing something.

“Part of my role has been to try and move it all forwards and I’m very proud of what I’ve done, but Simon has put a huge amount of work into this deal and deserves a lot of credit for pulling everything together to get us into the position that we are in now.”

Austin revealed that discussions had taken place about introducing the Alfa Romeo this season, before the decision was taken to instead focus on 2018 and ensure that Handy can hit the ground running when the car makes its debut.

“We came close to doing it twelve months ago [for 2017] and I was ready to go and give it the green light,” he said. “Simon is more sensible than me though – which is why we work so well – and said we needed to wait to make sure we did it properly. We didn’t want to rush things and we knew that in the Toyota, we had a package that was already working well.

“It would have been late in the day to try and do it for this year, and I think Simon was right, as we are better prepared than we would have been if we’d rushed to get the car on track for this season.

“We have a shell being worked on already and we can spend more time on making sure that we get it right, rather than just focusing on getting the car built so we can get out on track.

“What that means is that when the car is revealed at the Autosport Show in January, it will be ready to go straight onto the track to start testing and then we can aim to hit the ground running when we get to Brands Hatch for the opening round.”

The Alfa Romeo will run as an Independent entry, with the ultimate goal being to try and tempt Alfa Romeo to return as a manufacturer team for the first time since Super Touring.

“The team will be Independent but is backed by the Alfa Romeo dealers,” Austin added. “We have the blessing of Alfa Romeo and they are watching us to see what we do, and hopefully in the future we can tempt them to make a return as a manufacturer team alongside us.

“To get manufacturer support is the ultimate aim for any team, but the support we have from the dealer network is overwhelmingly positive and they all want to see this succeed.”

Alfa Romeo hasn’t been seen in the BTCC since the 2007 season, when Quest Racing and A-Tech fielded three 156 models for Eoin Murray, Dave Pinkney and Richard Marsh.