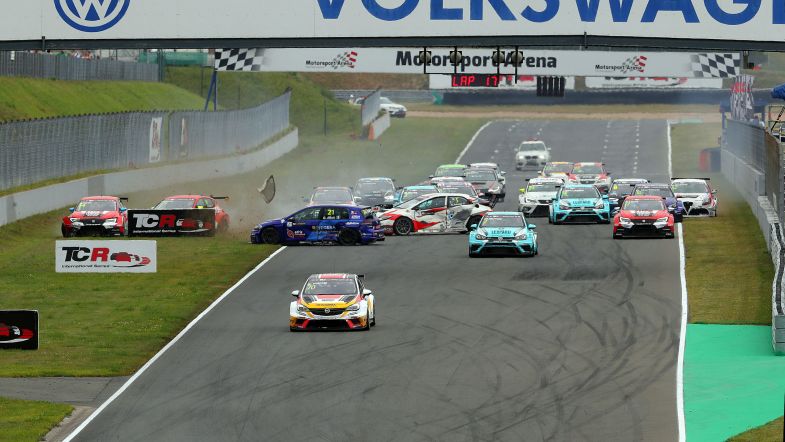 Championship contender Roberto Colciago has been forced to withdraw from this weekend’s eighth round of the TCR International Series, after it’s been determined a broken rib sustained in the second race crash at Oschersleben eight weeks ago hasn’t yet healed.

The 49-year-old and reigning TCR Italy series champion sits third in the drivers’ championship, and has won three races so far this season with the Hungarian M1RA team in his Honda Civic TCR, and was a firm title favourite.

The Italian was caught up in a major first lap incident in the second race in Germany, when he came together with Team WRT’s Jean-Karl Vernay and Craft-Bamboo Racing’s James Nash towards Turn 1, which caused a multi-car pile-up behind them.

“Unfortunately, due to injuries sustained at the TCR International event at Oschersleben, Roberto Colciago has had to withdraw from this weekend’s round at Buriram,” said his team in a statement. “Roberto, who lies third in the drivers’ championship, broke a rib in the first-lap accident in Race 2 in Germany in July.

“A medical examination has unexpectedly revealed that he is not yet fully recovered, despite Roberto having indicated that he now feels a lot better than in recent weeks. While we would love Roberto to continue to help M1RA’s push for the championship this weekend, we would never wish to risk the health of one of our drivers and fully respect the decision not to race.

“We would like to wish Roberto the speediest of recoveries as he pushes hard to be fully recovered in time for the Zhejiang round in October. In the meantime, we are working hard to find a fast solution to this unfortunate situation.”