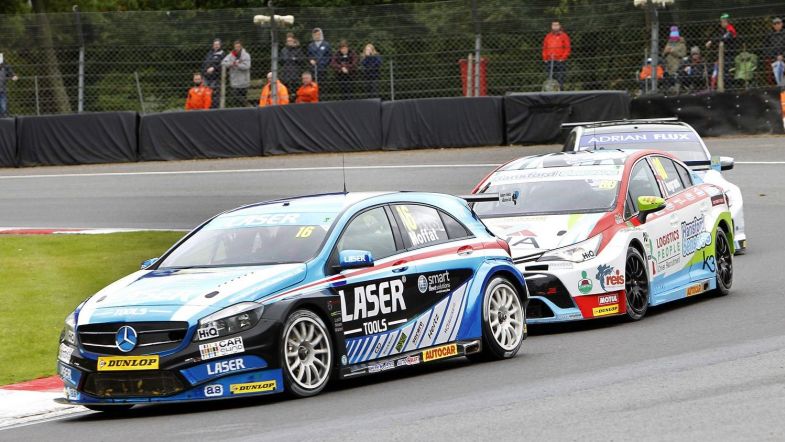 Aiden Moffat drove an expert race in tricky conditions to win the first race of finals day at Brands Hatch ahead of Tom Ingram, as Ash Sutton tightened his grip on the BTCC title with third place to extend his lead to 24 points over Colin Turkington.

Mercedes driver Moffat took the lead exiting Paddock Hill Bend on the opening lap, when pole-man Jack Goff lost the back end of his Eurotech Racing Honda Civic Type-R and slid across the grass into the barriers on the outside of the circuit.

Moffat led every lap in his Mercedes A-Class, resisting pressure first from Team BMR’s Sutton, and then Speedworks Motorsport’s Ingram, who edged his way past the championship leader across the stripe at the end of lap five.

The man with the biggest smile on his face at the end of the race was Sutton, as he added another podium to his collection while West Surrey Racing’s Turkington could do no better than 15th.

In slippery conditions, Turkington’s BMW 125i struggled with tyre temperature in the lower reaches of the top 20. And although he made some forward progress to sit on the fringes of the top 10, contact with Matt Simpson on the final lap saw him drop into the final points place.

Some consolation for Turkington came in the form of the teams championship, which was wrapped up after the first race.

Off the podium, Motorbase Performance’s Mat Jackson charged through to fourth from 15th on the grid at his team’s home race, with the Power Maxed Racing duo of Tom Chilton and Senna Proctor circulating in close company throughout to take fifth and sixth in their Vauxhall Astras.

Outgoing champion Gordon Shedden was seventh in his Team Dynamics Honda Civic Type-R, with Dave Newsham, Rob Austin and Matt Neal rounding out the top 10. For his part, Goff managed to fight back to 12th from plum last on the grid, meaning Ingram now has one hand on the independents’ trophy.

The rain stopped before the race but the conditions remained tricky, meaning Rory Butcher, Stewart Lines, Josh Cook, Andrew Jordan, Jason Plato and Jake Hill all gambled on wet tyres at the start.

And while they all made hay in the early laps, they quickly started to fall back as the track came to the slick-shod runners.

Ciceley Racing’s Adam Morgan hit the wall hard on lap two in his Mercedes A-Class, repeating the feat on the next tour to retire from the race with heavy front end damage.

Both Hill and Josh Price served drive-through penalties for false starts as the first three drove away at the front, battling in close company around 10 second clear of the following pack.

Jackson made it to fourth as early as lap six, passing Austin at Druids, before the Handy Motorsport man spun off at Graham Hill Bend on the following lap and fell to the bottom of the top 10.

While the battle at the front remained close throughout, Sutton took no risks to extend his lead by 14 points over Turkington, meaning he could wrap up the title in the second race.