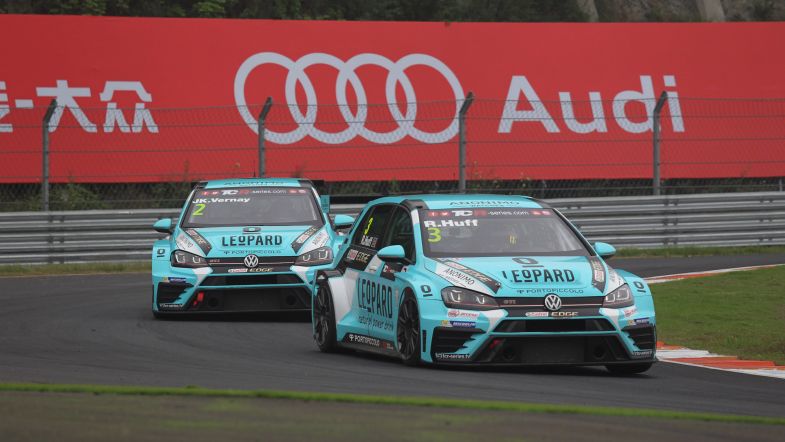 Rob Huff has taken pole position for the Zhejiang round of the TCR International Series at Zhejiang, outqualifying Team WRT team-mate Jean-Karl Vernay, while Hyundai showed great pace in Q1, with Alain Menu setting the fastest time of the day, but was unable to participate in Qualifying 2.

The Hyundais led the first part of qualifying, with Alain Menu setting the best time of the day with a lap time of 1:32.811, just a tenth ahead of Gabriele Tarquini, but with the Hyundais not eligible for points they couldn’t proceed into Qualifying 2.

Stefano Comini was the first major casualty after the Comtoyou Audi driver failed to make it through, blaming the circuit which doesn’t suit the RS 3 LMS.

In Q2, championship leader Attila Tassi briefly held provisional pole in his M1RA Honda, but was soon outpaced by Jean-Karl Vernay, fresh from his win in the TCR China series, with the Frenchman going fastest of all with a time of 1:33.341

Vernay’s team-mate Rob Huff was down in 12th until the final moments of the session, but the Briton then went out and set two quick laps at the end, first jumping to second, and then going one better with a time of 1:33.173 to take pole position, his first of the season in the Team WRT Volkswagen.

Vernay’s second place nets him four points and moves him into the lead of the drivers’ championship, two points clear of Tassi.

Pepe Oriola was third fastest in the Craft-Bamboo SEAT, with Gianni Morbidelli fourth fastest in the WestCoast Volkswagen, with Dan Lloyd completing the top five for SEAT.

Championship contenders Roberto Colciago and Attila Tassi qualified sixth and seventh, with James Nash and Davit Kajaia next up, with Comtoyou Racing’s Frédéric Vervisch tenth and securing the reversed grid pole for Race 2.