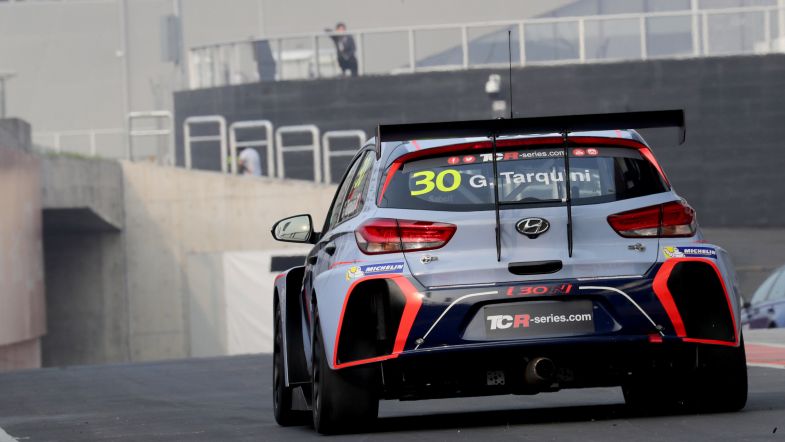 Hyundai driver Gabriele Tarquini scored a sensational debut win for Hyundai in the TCR International Series, driving through from 14th on the grid to the lead in 11 laps to win on his and the Hyundai i30 N TCR’s debut.

The 55-year-old Italian put on a display of masterful overtaking manoeuvres to take the points-ineligible i30 N TCR through into the lead, while Team WRT’s Jean-Karl Vernay’s second place means the Frenchman scores the maximum possible points to his championship.

At the start, Pepe Oriola rocketed through from the front row to put his Craft-Bamboo Racing SEAT into the lead ahead of the two Team WRT Volkswagens, with Jean-Karl Vernay dropping to second while pole-sitter Rob huff bogged down at the start and dropped to fifth.

Further behind, and TCR newcomer Denis Dupont was knocked into the barriers in his Comtoyou Racing SEAT León, after the other Hyundai of Alain Menu tried to thread both Dupont and Boutsen Ginion Racing’s Aurélien Panis, for which the race officials decided to hand Menu a drive-through penalty.

Tarquini was already scything his way up the order, and was up to sixth by the end of the first lap, and the slithered past both WRT’s Rob Huff and Comtoyou Audi driver Frédéric Vervisch on lap four.

Tarquini would then pass the WestCoast Racing Volkswagen of Gianni Morbidelli for the final podium spot on lap three at Turn 1, and then closed on the battling pair of Oriola and Vernay, passing Vernay on lap six and then following Oriola for four laps as he built up his challenge.

“I never dreamed I’d be first after starting 14th, that was probably my best race ever. Alain touched a car in front of me and made a bit of a mess so I was sixth after the first lap. Oriola had really good pace, so I tried to slow the car and cool down a little bit.

The pass for the lead came on lap 11 at Turn 1, with Tarquini diving down the inside to pass Oriola. A lap later and Vernay, now joined by Rob Huff who’d worked his way back forward, made a lunge down the inside of Oriola to take the lead, with the Spaniard knocked sideways and fell behind Huff as well.

At the next corner, Morbidelli made a similar move and Oriola was off wide again, and would go on to finish fifth after leading the first half of the race.

Despite serving a drive-through penalty, Alain Menu recovered to finish 12th, only 20 seconds off the lead and one spot behind Attila Tassi, who scores one point in the championship, but with Vernay scoring the maximum 25, the Frenchman now leads the standings by 26 points heading into Race 2, where he starts ninth on the grid.