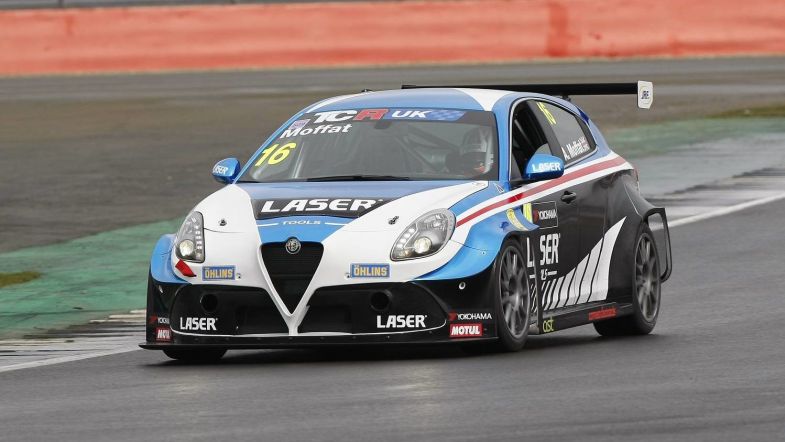 Aiden Moffat was fastest of all in the second test session at the Silverstone National circuit in Northamptonshire, setting the pace as the chequered flag fell in his Alfa Romeo Giulietta, displacing the Team Pyro Honda Civic of Ollie Taylor in a drying session by two-tenths of a second.

The pair finished ahead of the WestCoast Racing Volkswagen of Andreas Bäckman, with Howard Fuller fourth quickest in the Sean Walkinshaw Racing Honda Civic, all within four-tenths of a second.

Carl Swift was fifth fastest in his Endurance Financial Racing Cupra TCR DSG, with the first session’s pace-setter Finlay Crocker sixth quickest in the tenth-generation Civic Type R, just over a second behind.

Ten cars took to the circuit, with Essex & Kent Motorsport’s Lewis Kent missing the session due to a technical issue with his Hyundai i30 N TCR.

Missing again were Darelle Wilson in the DW Racing Vauxhall Astra TCR who’s waiting for Opel’s technical team to arrive later this evening, and Olli Kangas who will skip the first day’s testing.

Dan Lloyd was on circuit in his WestCoast Racing Volkswagen, but was again running without a transponder so his times are unknown.

The third and final test of the day is scheduled for 15:00 BST.