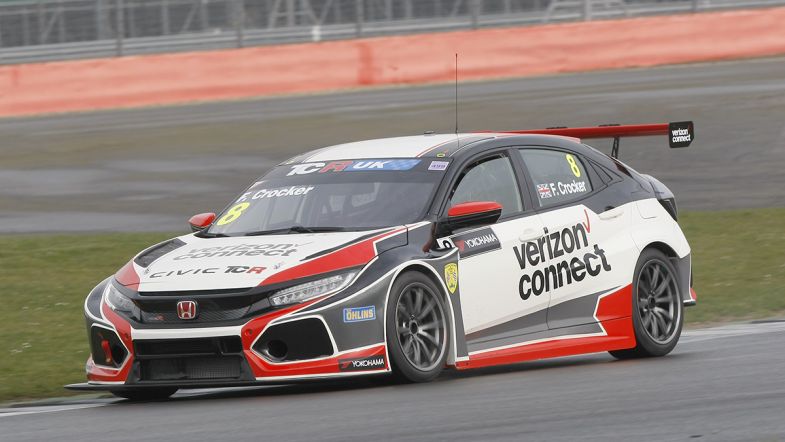 Finlay Crocker topped the time sheets for the first test of the 2018 TCR UK Touring Car Championship session at Silverstone, outpacing Aiden Moffat’s Alfa Romeo Giulietta by just seven-thousandths of a second in the final moments of the session.

The VFR Racing Honda driver posted a best time of 1:03.314 in his Civic Type R FK8 TCR at the end of the damp 35-minute session, outpacing Moffat in the family-run Alfa Romeo, with the 21-year-old behind the wheel of the Romeo Ferraris-built Alfa Romeo for the first time.

Derek Palmer was third fastest, also getting his first taste of the new Alfa Romeo, albeit one second off the pace, while Lewis Kent was fourth-fastest in the lone Hyundai i30 N TCR, 1.5 seconds down.

11 cars took to the track, with Dan Lloyd joining late in the brand-new 2018-spec Volkswagen Golf GTI TCR, but no times were logged as the car had no transponder.

The two entries from the 13-car entry to not take to the track were Olli Kangas, who doesn’t arrive until Saturday to drive the LMS Racing Cupra TCR, and Darelle Wilson, who’s not due to hit the track until later this afternoon when his technical team arrive.