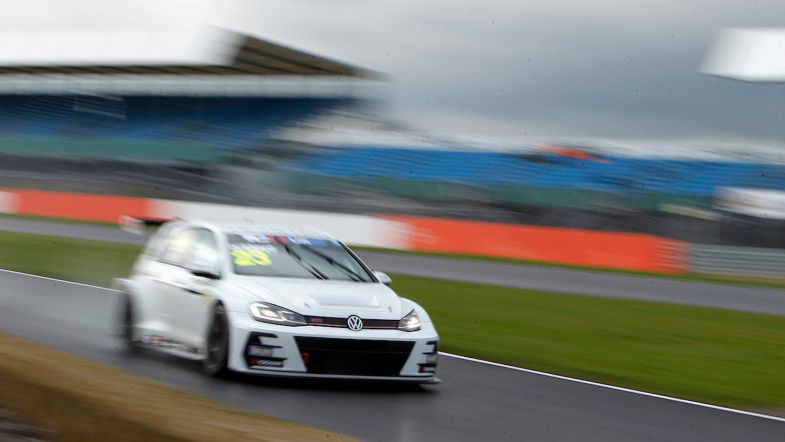 Lloyd made a successful launch from pole to lead into Copse ahead of Moffat, but Moffat was soon on the rear of Lloyd’s Volkswagen Golf GTI TCR and was threatening the 26-year-old throughout the opening laps until Lloyd was eventually able to break away.

Behind, Lewis Kent in the Essex & Kent Motorsport Hyundai i30 N TCR was passed by Taylor’s Team Pyro Honda Civic FK2, with Kent slowly dropping down the order which created a frenetic scene behind as a gaggle of cars fought over the position.

Andreas Bäckman in the WestCoast Volkswagen was able to move up into fourth ahead of Kent on the second lap, which saw Kent now fending off Carl Swift’s Cupra TCR and the SWR Honda of Howard Fuller.

Swift spun out of sixth on his own a lap later and fell to the back of the pack, while Kent lost out to Fuller on lap five and was now defending against Olli Kangas’ Cupra and Darelle Wilson’s Vauxhall Astra.

Wilson’s race ended two laps later at Brooklands, after contact with Kent’s Hyundai as he made contact with the nose of his i30 N TCR.

The race settled down from then on, with Howard Fuller in the SWR Honda Civic the chief fight remaining as he defended to keep Finlay Crocker behind in the newer FK8 Honda Civic Type R during the closing stages.

As the race drew on, a number of track limits penalties began to be handed out, with Carl Swift the first to receive a penalty, followed by Finlay Crocker, and then Aiden Moffat with just a lap to go.

The penalties made no difference to Swift or Crocker’s finishing positions, but did see Moffat take a hit, with the 21-year-old Scotsman dropped from second to fourth at the finish.

The team immediately appealed the penalty as no warning flag was given, and the penalty was rescinded, restoring Moffat to second, with Taylor third.

Lloyd’s win means he now leads the championship on 51 points, with Moffat seven points behind on 44.

The second race of the day gets underway at 16:05 BST, with Stewart Lines in the Maximum Motorsport Cupra TCR on pole, with Race 1 winner Dan Lloyd starting in ninth position.