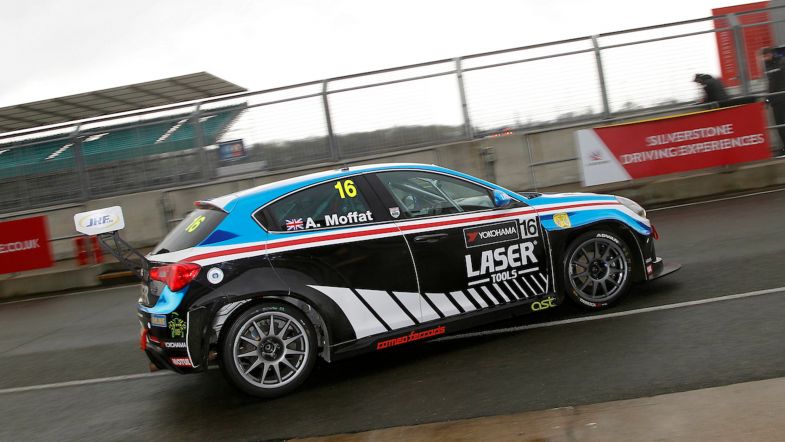 Aiden Moffat lost a near-certain second place which would have seen him second in the TCR UK standings at Silverstone, before his Alfa Romeo Giulietta stopped with two laps to go, with the car’s builders Romeo Ferraris confirming the car had run out of fuel.

Moffat had a strong run at the start to go from ninth to fourth after one lap, before picking off Olli Kangas’ Cupra TCR and then Andreas Bäckman’s Volkswagen to take second position.

Moffat then held off Bäckman throughout the race, with the Swede keeping in touch until the Alfa slowed on lap 29 of 31.

“It’s just one of those things,” said Moffat to TouringCarTimes after the race.

“Those Vollkswagens seems a lot better through the slow stuff; they’re better balanced cars and better at change of direction, while the Alfa’s good through the fast corners with a strong engine.

“So, the last sector is where me and the Alfa were no match for them, and then when I was in front of them they could sit in my tow down the straights, so I could get by him but trying to shake him wasn’t easy.”

The Alfa Romeo’s builders Romeo Ferraris were on hand to support Aiden Moffat Racing this weekend, with team principal Mario Ferraris and operations manager Michela Cerruti on-site, with the team analysing and confirming that it was a fuel issue for Moffat.

@AidenMoffat16 in Race 2 run out of fuel with 3 laps to go while he was P2. @TCRUK_series @SilverstoneUK

The weekend was less successful for team-mate Derek Palmer, who missed all running on Saturday and retired in both of Sunday’s races.