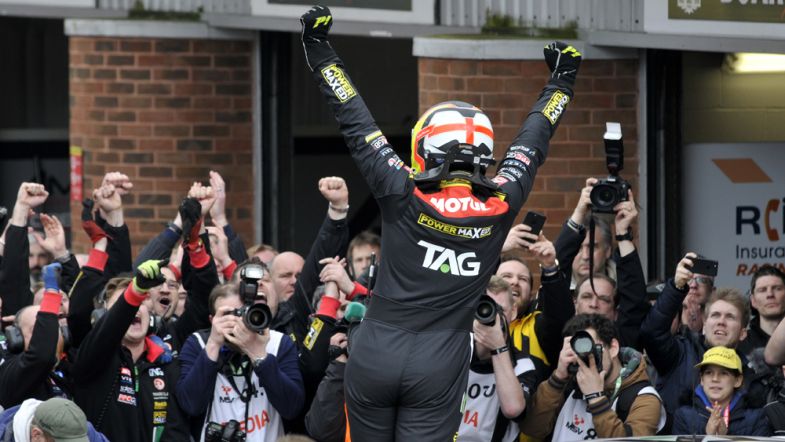 Senna Proctor secured his maiden win in the British Touring Car Championship in an astonishing second race of the weekend at Brands Hatch.

The race would ultimately come down to who made the right call on tyres ahead of the race, with those to go with wet rubber having the benefit during the early stages before the track dried out and those on slicks were able to power their way through the field.

Early on, Andrew Jordan had led his 300th race after making the best start in his WSR-run BMW, with the leading runners all going for wet tyres.

An early Safety Car period after Stephen Jelley went into the gravel was merely a pre-cursor for the drama that was to come as by the second half of the race, it was clear that dry tyres were the way to go.

As those on slick tyres scythed through the field from the back, it was the Mercedes of Aiden Moffat that led the way into the final laps with the unlikely trio of Senna Proctor, Jake Hill and Ollie Jackson giving chase.

When Moffat made a mistake coming out of Druids and clattered into the tyres on the penultimate lap, Proctor moved into the lead and despite the best efforts of Hill behind, secured a first win for both himself and the Power Maxed Racing team from 27th on the grid.

Second place for Hill – who had started down in 25th – and third for Jackson ensured they also took to the podium for the first time, whilst Tom Boardman was fourth in his MG ahead of a recovering Moffat.

Rob Austin came through to sixth ahead of Matt Simpson, with Mike Bushell eighth having pitted behind the Safety Car to switch to slicks, Rory Butcher and Jack Goff, who had led the race for a long spell, rounded out the top ten as the best of the wet-shod runners.

Elsewhere amongst those expected to be in title contention, Tom Ingram was eleventh with Ash Sutton in twelve, with early leader Jordan down in 21st.

Rob Collard and Colin Turkington would finish a lap down, Collard after a spin and Turkington after a mechanical issue on the green flag lap that meant he lost a lap early on, whilst Matt Neal also finished a lap down after a troubled race that included a trip through the gravel at Paddock Hill.