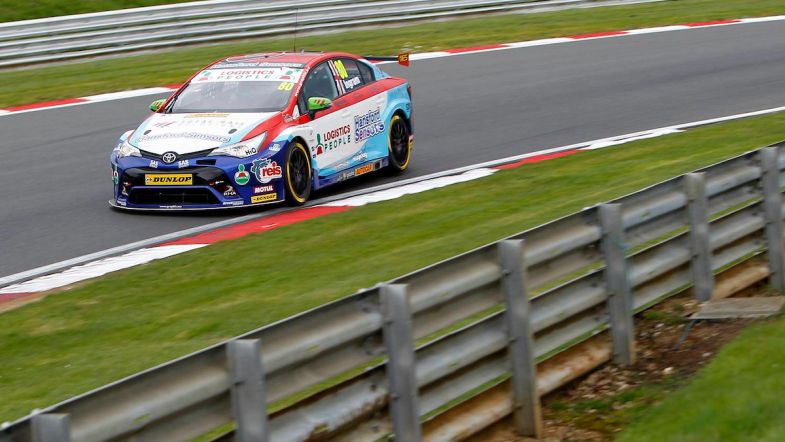 Tom Ingram made it three different winners from the first three races of the BTCC season with victory in the final race of the weekend at Brands Hatch.

With all drivers running on dry tyres following the drama of race two, Ingram worked his way through the order in his Speedworks-run Toyota Avensis to pick up a victory that also earned him the early season championship lead.

The race had started with Rob Austin retaining the lead from pole having benefitted from the reverse grid draw, with Ollie Jackson’s Audi jumping up to second spot.

As in race two however, there would be an early Safety Car bunching up the field after Rob Collard and James Cole collided at Druids, with the BMW ending up stricken in the gravel.

After the restart, Ingram was on a move from fourth place and soon got ahead of Aiden Moffat’s Mercedes into third spot before making his move on Jackson for second. Although Austin would do his best to retain top spot in the Alfa Romeo, the Toyota was soon able to get into top spot and was able then pull away from the chasing pack to give Ingram victory.

Behind, Austin held second right through to the start of the final lap when pressure from Adam Morgan eventually told, with the Mac Tools-backed Mercedes man taking second with a fine move into Paddock Hill Bend.

Ash Sutton drove well in his Subaru Levorg to take a solid fourth at a circuit where he admitted that the rear-wheel drive car isn’t at its best with Mike Bushell fifth in his battle-scarred VW having had contact with both Tom Boardman and Aiden Moffat during the early stages.

Rory Butcher’s MG was sixth ahead of Eurotech pair Jack Goff and Matt Simpson, with Colin Turkington and Josh Cook rounding out the top ten.

Elsewhere, twelfth place for Matt Neal allowed him to salvage some points from a tough opening weekend with the new Honda Civic but there were no points for Jason Plato who took the flag down in 19th spot.