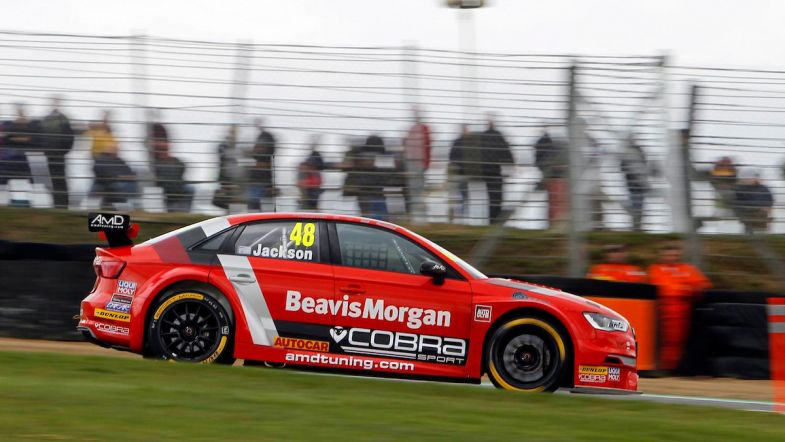 Ollie Jackson admitted he was over the moon to secure a maiden BTCC podium after reaping the rewards of a tyre gamble in the second race of the weekend at Brands Hatch.

Jackson had gone into the season opener looking to challenge for points in his AmD-run Audi S3, and a strong run in the opening wet race saw him achieve his aim as he battle through from 23rd on the grid into twelfth place.

Electing to take a gamble on running the soft compound dry tyre in race two, Jackson slipped back down the order in the early stages before the circuit conditions improved enough for the slick-shod runners to be able to fight their way forwards.

Heading into the closing laps, Jackson found himself in a four-car fight for the win alongside Aiden Moffat, Senna Proctor and Jake Hill, and when Moffat ran off track on the penultimate lap, Jackson was able to secure his maiden podium after nearly 150 starts in the series.

It was also the 100th race for his Audi chassis, which has previously been raced by Robb Holland, Nicolas Hamilton and Hill.

Although the weekend ended in disappointment when contact from Jack Goff’s Honda in the final race prevented him from picking up a top ten finish that would have secured the Jack Sears Trophy lead, Jackson admitted that the opening rounds had gone better than he could have expected.

“It’s been an emotional weekend,” he said. “We’ve worked so hard as a team to improve the Audi and have been getting quicker and quicker, and today we’ve been able to fight for strong results across all three races.

“Race one was perhaps the race of the day to be honest and to come from where we where on the grid to finish twelfth was really good and helped to set up the result in race two.

“We knew it was a gamble to go with slicks but also knew that the circuit was only going to get drier and it proved to be the right call. The car was absolutely fantastic and to bring home a podium was beyond our expectations coming into the weekend.

“Even with the success ballast onboard for race three, we could well have had a top five finish had we not been hit off track a few times, which also cost us the Jack Sears Trophy this weekend.

“However, I can’t go away from a weekend where I’ve taken my first podium feeling disappointed and I think we have shown this weekend that we deserve to be taken seriously in this series and aren’t just here to make up the numbers. We have to now try to build on this and fight for regular points as the season goes on.”