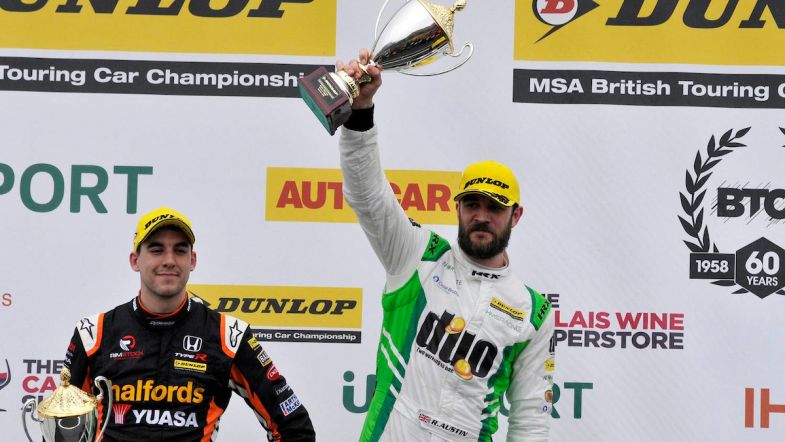 Rob Austin admitted he was feeling mixed emotions after securing a first podium finish with his new Alfa Romeo Giulietta at Brands Hatch.

The BTCC season opener marked the debut for the new car, which has been built up by the HMS Racing team over the winter, with Austin heading into the weekend seeking to run towards the sharp end of the grid after showing impressive speed in winter testing.

Qualifying just outside the top ten, Austin’s race day didn’t start in the best fashion when he was forced out of race one with damaged suspension after a clash with Tom Oliphant but he fought back well in race two – electing to run slick tyres and coming through from the back of the grid to finish sixth as a result.

On pole for race three thanks to the reverse grid draw, Austin led the race in the early stages before slipping behind Tom Ingram’s Toyota and then fought hard to keep Adam Morgan at bay until the start of the final lap.

Although Morgan was able to find a way through, Austin’s third place was still the first podium for an Alfa Romeo since 2001 and ensures that he leaves Brands sitting fourth in the standings.

However, whilst there was obvious delight at the result, there was also a sense of sadness that the podium couldn’t be shared with long-time team member Shane Stokes, who died following a car accident just before Christmas.

“It’s for Shane,” Austin admitted. “It’s very mixed emotions to be here [on the podium], we miss him a lot – a lot – and this is for him. He’s looking over us and gave us that luck in race two with the reverse grid draw.

“We didn’t have the front tyres to win it, this is the first time we’ve put soft tyres on it, so we’ve still got a huge amount to learn with this car but it’ll come. It’s a great base car, the engineering that’s gone into this is the best I’ve seen on this grid.

“We just need to figure out how to get it to work, we need a couple of test days and a bit of development to do that. We’ve got great support from DUO, Northgate, Close Brothers, and with their help I’m sure we’ll get it there.”

Team boss Simon Belcher was also left with mixed emotions after a successful start to the season.

“I’m obviously super proud of the whole team, everyone has done an incredible job with the Alfa and there have been a lot of late nights to get us to this position – and this is only the start,” he said.

“To see Rob on the podium on our first weekend with a brand new car, which only had three days of running prior to coming to Brands, is more than we could have dreamed of.

“Obviously, we’re all thinking of Shane this weekend, who is so dearly missed by everyone at the team. This result is for him, he’ll always be a massive part of whatever DUO Motorsport with HMS Racing achieves.”