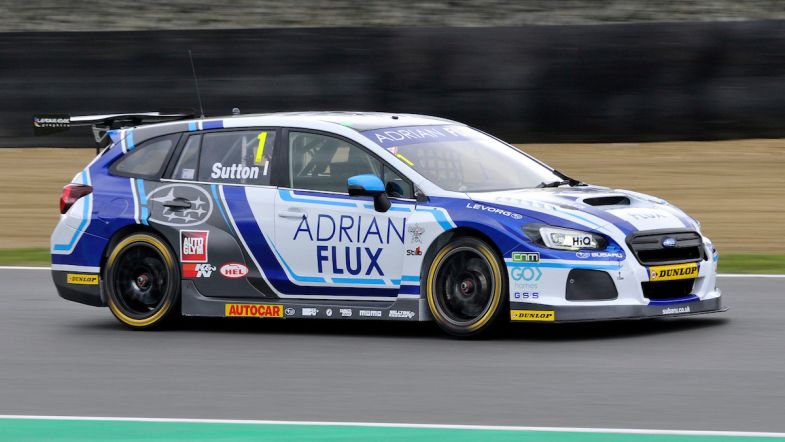 Defending champion Ash Sutton led the way at Thruxton as a number of teams headed to the fastest circuit on the BTCC calendar for testing ahead of round three of the season next month.

Sutton topped the times during the second of two sessions around the high-speed Hampshire at the wheel of his BMR-run Subaru Levorg, posting a quickest time of 1:15.717s as he completed more than 40 laps of running.

That was good enough to edge out the Team HARD Volkswagen CC of Mike Bushell, with the double Clio champion leaving it until late in the day to post a time that was just 0.026s slower.

Matt Neal’s Honda Civic Type-R, which managed just eight laps in the morning with a throttle issue, was also within a tenth of a second of the fastest lap in third.

“It’s been a fast day in general and everyone’s been quick,” Sutton said. “We’ve come here looking for mileage and I think we’ve found a few key things. It’s been a general test, not just a Thruxton test.

“We haven’t done mileage prior to Season Launch at Donington Park then Brands Hatch later that week but that was rained off. We’ve come to make up time on the others and we’ve achieved some key things and we hope some of those will carry over to Donington.”

Jack Goff was fourth ahead of two of the Motorbase-run Ford Focus RS cars in the hands of Sam Tordoff and Tom Chilton; the latter having been quickest during the morning session.

Chilton was one of only two drivers who failed to improve on their time in the second session, with Brands Hatch race winner Senna Proctor being the other in tenth spot.

Josh Cook, Dan Cammish and Aiden Moffat filled the places in between.

In total, 25 drivers took the track over the course of the day, with the VWs of Bobby Thompson and Michael Caine only appearing during the afternoon.

BTC Norlin Racing, Speedworks and the AmD-run MGs were amongst those cars to skip the test.