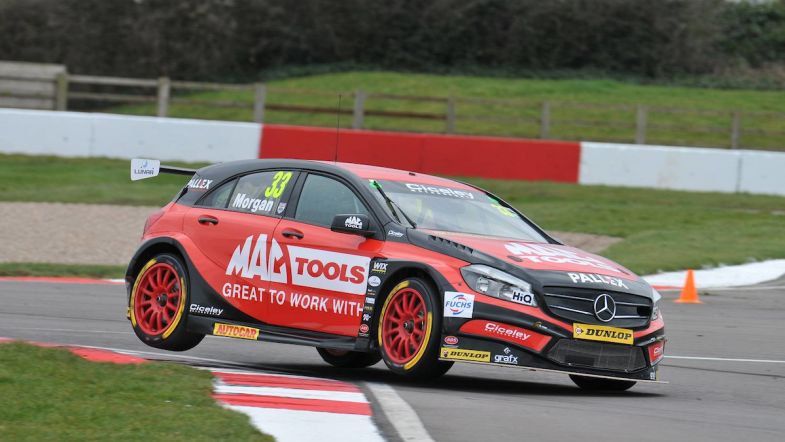 Adam Morgan saw off the challenge of Josh Cook to take victory in the final BTCC race of the weekend at Donington Park.

Morgan had stared the reverse grid race from fifth on the grid but came through a chaotic opening lap unscathed before battling his way through to the front of the field – eventually returning to the top of the podium for the first time since 2016.

An opening lap incident through the Craner Curves removed Sam Tordoff, James Cole and Josh Price from the race, with Brett Smith then going off at Coppice following contact from Rob Austin to bring the Safety Car out.

When the race eventually restarted on lap seven, it was Ash Sutton who found himself out front after the defending champion had battled ahead of the MG of Rory Butcher on the opening lap, with Morgan behind having also got ahead of the Scot.

Sutton was able to build a slender lead but running on the harder tyre, he soon started to fall into the clutches of the drivers behind.

Morgan got ahead into the lead but soon had Cook giving chase, with the pair running together for the remainder of the race.

Whilst Cook did his best to find a way through, Morgan wasn’t to be denied as he became the fifth winner in six races; Cook taking the finish just 0.368secs behind.

Sutton did his best to try and hold onto third but pressure from Aiden Moffat would ultimately tell as the Laser Tools Racing man completed the podium with the BMWs of Rob Collard and Andrew Jordan also getting ahead of Sutton before the finish.

Seventh went to Matt Neal ahead of championship leader Tom Ingram, with Tom Chilton and Jake Hill rounding out the top ten.

Chris Smiley’s hopes of a top ten finish were ended by contact from Dan Cammish on the twelfth lap, whilst there were no points for Colin Turkington who was pushed off the grid for the second time in the day and could only end up 21st.