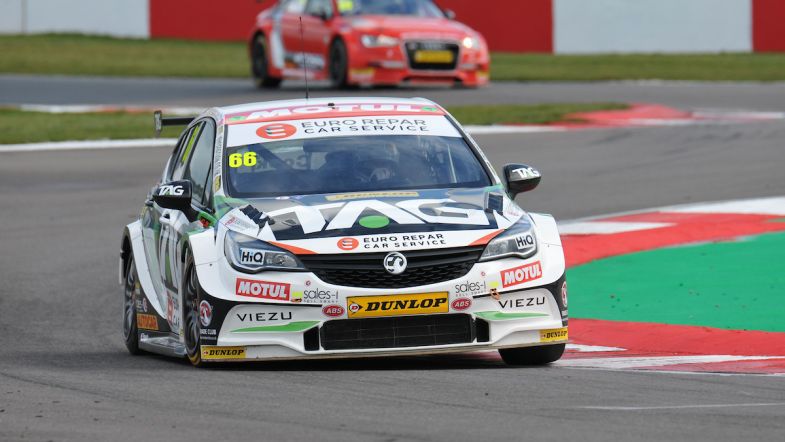 Josh Cook converted pole position into victory as he secured his maiden win in the BTCC in the opening race of the weekend at Donington Park.

The Power Maxed Racing man had led the way in qualifying to take pole for the first time but slipped behind the fast-starting Honda Civic of Chris Smiley when the lights went out.

It didn’t take Cook long to reclaim the lead however and having got back in front before the end of the opening tour, Cook was left to run unchallenged ahead of the chasing pack.

It meant a second win in the space of three weeks for the Power Maxed Racing team after Senna Proctor’s success at Brands Hatch during the season opener.

Behind, Dan Cammish fought his way up from fourth to second on the opening lap having got ahead of both Smiley and Sam Tordoff and – as with Cook – would go on to enjoy a pretty straightforward race as he picked up the first podium finish for the new Dynamics Honda Civic Type-R.

Tordoff had looked set to take third for Motorbase as he ran in a podium position through the first half of the race, but he would suddenly slow and return to the pits at the end of the tenth lap to log the only retirement.

That promoted Aiden Moffat’s Mercedes onto the podium after a solid drive from the Laser Tools Racing man, with Brett Smith, James Cole and Matt Neal rounding out the top six – the latter after a strong drive through the field from 17th on the grid.

Running on the slower hard tyre, Smiley would battle hard to keep Proctor’s Vauxhall at bay to claim seventh place, with Tom Oliphant and Colin Turkington rounding out the top ten.

Turkington had been lucky to escape a lurid slide at the Old Hairpin early on after contact with Proctor’s Vauxhall, with championship leader Tom Ingram amongst those forced to take avoiding action.

Ingram would finish down in 14th place, which means his lead over Jack Goff in the standings is now just two points; Goff having finished one place higher in the race.

Elsewhere in the field, defending champion Ash Sutton was able to pick up points in twelfth but Andrew Jordan could only make his way up to 20th from the back of the grid after his issues in qualifying.