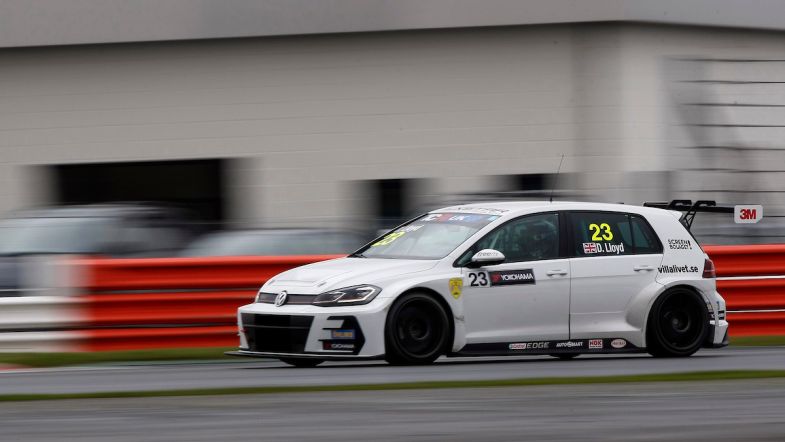 WestCoast Racing’s Dan Lloyd set the quickest time in the pre-event TCR UK test session at Knockhill which is being run in its unique reverse configuration this weekend. Half a second split the top five cars while the rest of the 11-car field was covered by less than a second.

Lloyd, who claimed a pair of victories in the series’ inaugural round at Silverstone in March, set a best time of 51.053 around the 1.3 mile circuit.

His WestCoast team-mate Andreas Bäckman posted the second fastest overall time across the four timed sessions and ended up two-tenths of a second off the pace.

The pair of Volkswagen Golf GTI drivers locked out each session between them, with Lloyd fastest in the first, second and third tests and Bäckman topping the fourth.

Laser Tools Racing had a mixed day, with BTCC race winner Aiden Moffat fourth quickest and Derek Palmer Jr last. Palmer ran his own programme in the first session, opting to bed the brakes in while Moffat elected not to do any laps until the second session.

A minor off for Moffat at the chicane temporarily halted his progress but the Dalkeith driver bounced back to post a time just one thousandth of a second behind Taylor.

Another BTCC driver, Josh Price ended the day fifth in his Civic FK2, two-tenths faster than the car’s previous owner Finlay Crocker in the newer FK8.

Jessica Bäckman put in the most cumulative laps in the third of the WestCoast Racing Volkswagen Golf GTI TCRs as she ended the day tenth ahead of Palmer Jr.

Free practice for the second round of the championship begins tomorrow at 09:55 BST with qualifying taking place at 14:25 BST.