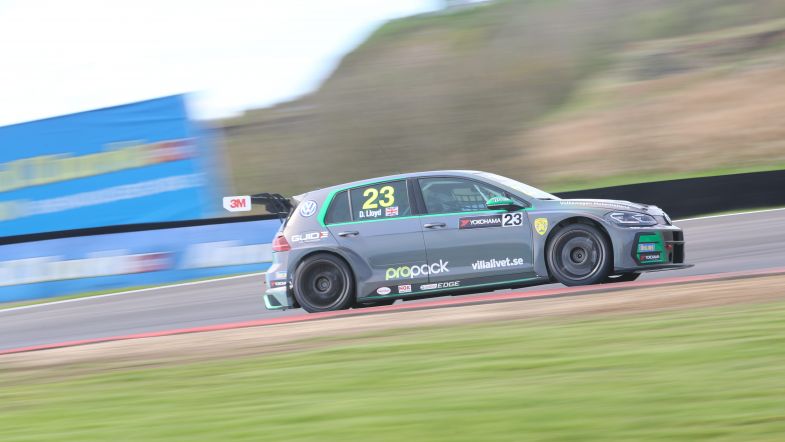 Dan Lloyd: ‘I literally could not drive faster’ for Knockhill pole

Lloyd had been under pressure from the Alfa Romeo Giulietta TCR of Aiden Moffat for much of the session, with the Scotsman getting to within one-hundredth of a second of the Volkswagen Golf GTI TCR driver at one point.

But Lloyd dug deep and set a stunning lap-time of 50.823 to beat Moffat by over two-tenths at the flag.

Having dominated in the pre-event testing and setting the quickest time in the morning practice, Lloyd was satisfied with his hard-earned pole.

“It’s been mega, a really good weekend so far for me,” Lloyd told TouringCarTimes.

“Aiden was really strong in that first part of qualifying, a bit too close for comfort sometimes but I went out again and pushed it ten tenths and put everything on the line.

“I literally could not go quicker, which is what you want from a car in qualifying.

“Every corner, you have to push to the maximum to get the most out of the car but it’s so easy to make a mistake. The pole lap was on the limit and I just about managed to get away with it.”

With rain expected to hit the Fife circuit for tomorrow’s two races, Lloyd remains cautious of his chances of repeating his double victory in the opening round of the season at Silverstone in March.

Lloyd said: “it’s going to be very hard in the second race. The main thing is to try and find a gap and fight my way through the field, which won’t be easy as overtaking is quite difficut here. I’ve got a few ideas on how to do this but I won’t be telling you!

“It’ll be very tricky if it does rain tomorrow. The kerbs are very slippy and if you get it wrong on those, then you’re in the walls. So it’ll be interesting to see how the race goes.”

Team-mate Andreas Bäckman posted the fourth fastest time for race one and will start the second encounter from seventh in the second WestCoast Racing Volkswagen.

The Swede was frustrated after hitting traffic on his last lap but believes a podium is achievable.

“Of course I wanted to be higher up but I am still happy with the result. The track changed a lot from practice so it was a bit difficult to drive,” Bäckman told TouringCarTimes.

“I had a lot of clean laps early in the session but on my last flying lap, I had a lot of traffic which probably cost me some time. I think I could have got an even better time in the last minutes, but that’s how it goes.

“I think I have some good race pace in the car. It feels really good so hopefully I can stay up there with the fast guys and maybe get a podium.”